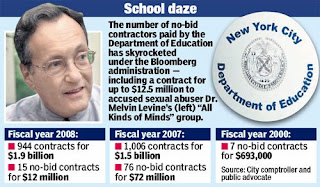 NY Post reports today that the $12.5 million DOE no-bid contract to All Kinds of Minds, founded by Dr. Mel Levine, trained fewer than 1/5 of teachers promised; more recently Levine has been accused of child sexual abuse.

More recently, the number of official no-bid contracts has lessened somewhat, to “only” $12 million last year, but one wonders if this is in name only. There is little or no accounting or explanation of the 944 contracts that last year that cost the taxpayer $1.9 billion. During the budget hearings, City Council Speaker Quinn asked the DOE to cut back or limit these contracts, but they continue to soar upwards each year.

For example, see the recent DOE announcement that the NYC Leadership Academy “was selected from among multiple vendors through a competitive procurement process” to receive a five year contract. Yet how competitive this process is questionable, given the fact that the Leadership Academy was founded by the Chancellor, is run by his appointee, and he was chair of the board until just weeks before he granted it this $50 million, five year contract.

How does the DoE justify a no-bid contract such as this? According to the Post article, "The DOE argues no-bid contracts get business done quickly, and when it comes to curriculum, quality is more important than price."

Did the DoE miss the nonsequitur there? Speed and quality have little to do with each other. When it comes to Schools Attuned, one questions the motives behind such hush-hush celerity. There was not even a public announcement of the contract.

It is good that the Post article questions the merits of Schools Attuned. I wish there had been more detail. Schools Attuned is a "brain-based" program that trains teachers to diagnose students according to "neurodevelopmental constructs" and then offer them a "strategy" (which they can look up in a "strategy binder").

We should not be diagnosing our students. Even if the diagnoses were based on true science, it would not be our role. And the "science" behind Mel Levine's system is questionable at best. The prefix "neuro-" can deceive--it sounds fancy, but it is not.

Some of these diagnoses shout pure quackery. One of the "neurodevelopmental constructs" is "social cognition"; one of its functions is "self-marketing." Is this what we should be teaching our students?

In his book A Mind at a Time, Levine writes, "Some kids have no notion of how to assemble their image. Consequently, they fail miserably at marketing themselves to their peers."

Or perhaps it is the peers who have trouble appreciating someone different from themselves. Perhaps school should be a time when children do not have to "market" themselves, when they can focus on other things.

This is one of many examples of pseudoscientific opinion touted as truth in the Schools Attuned program. This organization should not have a contract. Nor should it be treated as separate from Dr. Levine. At a certain level, it's harmless: it's all about looking at individual students' learning difficulties and finding a way to work with or around them. At another level, it's deceitful, pretending to be scientific when it is not, and joining with many other fads that emphasize process over content.

For more about problems with "brain-based" education in general, see an excellent video by Daniel T. Willingham.

And there is a very interesting book called The Brain and Learning (Jossey-Bass, 2008), with an introduction by Kurt Fischer and Mary Helen Immordino-Yang, who state emphatically that there is "currently no scientific basis for most of [the claims for brain-based education] because the research has not yet been done."

I hope the DoE is reconsidering the contract and the assumptions behind it.

Everyone must follow the rules except Bloomberg and Klein.

Does this amount of $342 million include the $80 million, five-year contract with New York City and CTB/McGraw-Hill for the so-called Acuity Tests?

My alternate "slogan" submitted to the Eduwonkette DOE slogan contest
(http://blogs.edweek.org/edweek/eduwonkette/) was "The NYC DOE: You can trust your kids to the folks who take no bids".

someone needs to investigate the mother lode of no bid contacts, i.e.
the one awarded to Columbia Teacher's College (Lucy Calkins)