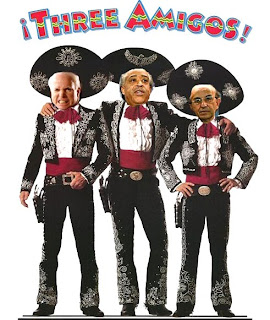 Joel Klein and Al Sharpton have been traveling the country, wooing editorial boards and other assorted opinion makers with the message of their Education Equality Project, which isn’t really about equality at all, but about promoting a particular conservative agenda: the panacea of competition and charter schools, scapegoating teachers, and overemphasizing high-stakes testing in the form of merit pay.

John McCain recently signed onto these principles, which was easy enough for him to do as they are basically the same as the education agenda of the GOP. In McCain’s speech to the Urban League, posted here, he attacked Obama for not doing the same:

“… My opponent talks a great deal about hope and change, and education is as good a test as any of his seriousness. The Education Equality Project is a practical plan for delivering change and restoring hope for children and parents who need a lot of both. And if Senator Obama continues to defer to the teachers unions, instead of committing to real reform, then he should start looking for new slogans.”

After the speech, Klein and Sharpton circulated a joint statement, praising McCain for his enlightened support, and by implication, pressuring Obama to follow suit:

"We are gratified that Sen. McCain has endorsed the principles of the Education Equality Project, joining education, civil rights, and elected officials across America who are working together to bring meaningful reform to our nation's public schools. Education reform, like civil rights, is above partisan politics and must be embraced by all."

McCain then further circulated the Klein/Sharpton statement, while his campaign aides lit into Obama for supposedly playing the “race card.”

All this put Sharpton in a rather sticky position. One would imagine that it is somewhat dangerous for him to be seen as complicitous with the conservative opponent of the first African-American nominee for President. As Sharpton himself is well aware, polls show that among African Americans, Obama far outstrips him in popularity.

Perhaps recognizing his vulnerability, Sharpton quickly backtracked, issuing a second statement, in which he tried to distance himself from McCain. This one, unlike the earlier one, was not posted on the Education Equity website:

So what platform is the Klein/Sharpton (and now McCain) alliance pushing? Let’s deconstruct it a little. See this from the EEP website:

“The project will take on conventional wisdom and the entrenched impediments to real reform, focusing on teacher quality and pay; accountability for results; and maximizing parents' options..” [Read: let’s bash the teacher unions, and promote even more testing and charter schools.]

“It will also challenge politicians, public officials, educators, union leaders, and anybody else who stands in the way of necessary change.” [Read: Let’s ignore the experts who point out the negative effects of high-stakes testing, including the way in which it makes test scores unreliable; and let's deny the legitimate priorities of public school parents and other stakeholders, who recognize the need for improving classroom conditions. Instead, let’s slander them and anyone else who dares to oppose us as defenders of the status quo.]

“This means challenging laws and contracts that preserve a system that fails students.” [More union bashing]

The one measure of every policy, regardless of the depths of its historic roots or the power of its adherents, must be whether it advances student learning. [Right. So why does Klein himself continue to refuse to provide urban, high needs students with the uncrowded conditions and smaller classes that he ensured that his own child would receive?]

It’s not a big mystery why Klein should be pushing himself into the national stage; clearly the man has a huge ego and probably aspires to being the next Secretary of Education. (It was reported today that his mom called the Palm Beach Post to complain that her son’s name had been edited out of a syndicated column by David Brooks; perhaps what he really wants to do is to please his own mom.)

A larger question is why Sharpton would put his own status and legitimacy on the line, by allying himself with such a controversial figure as Klein, who commands far less trust and respect in the minority community, especially in NYC. (Indeed, Klein continues to have high disapproval ratings among black New Yorkers – at 39%)

Until recently, Sharpton was under the cloud of numerous investigations. Most prominently, federal officials accused him of owing nearly $10 million in payroll taxes, and threatened him with criminal prosecution. According to news reports, “Sharpton’s civil rights group had failed for several years in a row to file income tax returns, obtain workers compensation insurance, or disclose how much it was collecting in donations or paying its top employees, as required by law.”

Just ten days after launching the Education Equality Project, Sharpton came up with $1 million, which he promptly handed over to the IRS as a downpayment; in turn, the feds agreed to drop criminal charges if he paid back what he owed the government over the next few years.

Still, according to the NY Post, the NY Attorney General is investigating Sharpton’s finances, his group, the National Action Network, and his other business ventures.

So where did he get the $1 million? As Sharpton explained to the Daily News, “"I make money, so I can pay."

Another mystery is who is funding the Education Equality Project. Until recently, David Cantor, the chief communications officer of the DOE, was listed as the main press contact on all its press releases; now they are being sent out without any names attached.

Is this effort being subsidized by tax dollars that should be going towards improving our schools? Or as Cantor recently announced to our list serv, is the source of funding an “anonymous” donor, but someone other than Bloomberg? If so, who might that be?

UPDATE: see this John McCain oped in the Daily News -- in which he argues for vouchers -- and criticizes Obama for not supporting them. Will Klein/Sharpton endorse that controversial position as well?