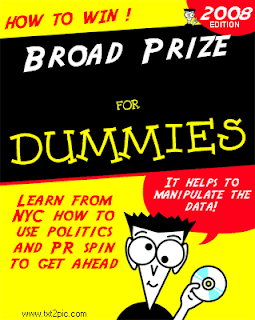 The Broad Prize will be awarded on Tuesday, which NYC won last year, despite protests from parents and others that this award was undeserved.

See, for example, the statement from Dave Quintana last year. Dave was one of four parents selected by DOE to give input to representatives from the Broad foundation beforehand:

This group of parents, handpicked by Martine Guerrier of the Department of Education (DOE), expressed uniform disappointment with the various changes put into place by DOE, the lack of transparency and accountability, and the lack of consideration given the views of parents about what their children really need to succeed.

Clearly the Broad Foundation did not take parents views into consideration when awarding this prize to NYC today.

See also the letter of protest signed by fifty one parents and teachers, sent to the Broad Foundation before the award was announced.

Since that time, Steve Koss has analyzed NAEP scores between 2003-2007 showing that NYC came in 11th out of 12 urban school districts in terms of gains.

There was also no closing of the achievement gap in NYC in the NAEP scores over this period, either in math or in ELA, for any grade level tested.

The NAEPs are considered the “gold standard” of assessments in terms of reliability.

As for the NY state scores, there was no narrowing of the achievement gap if scale scores are considered.

According to its website, the Broad Prize is awarded each year "to honor urban school districts that demonstrate the greatest overall performance and improvement in student achievement while reducing achievement gaps among low-income and minority students."

How can anyone be assured that the decision to award the Broad Prize is not determined more by politics and PR than actual improvements, and that this year’s winner deserves it more than NYC did last year?

Tomorrow we’ll know who has taken home the 2008 Broad Prize for Urban Education, awarded each year to the school district the Broad Foundation considers the nation’s “most improved.”

But chances are the award won’t put to rest questions about whether the foundation really picks the best districts. The official story is that a blue-ribbon panel consults not only school leaders but parents and teachers and reams of test score data. The panelists even said last year they do random school visits in the nominated districts.
----------------
Tanyaa
Internet Marketing