Class size audit: another broken promise to our children 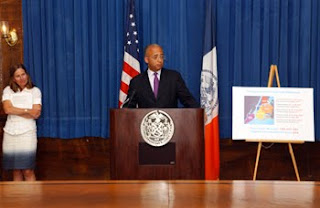 City Comptroller Thompson released a class size audit on Wednesday, showing that in 2007-8, the city misused $47 million meant to reduce class size in K-3rd grades. Instead, schools used these funds on other budget items. Press release is here; the full audit is here.

The city is a serial offender when it comes to class size. Since 2006, there have been at least five audits and reports showing how the city has misused nearly a billion dollars in state funds meant for be used to hire new teachers to reduce class size. Yet there are now nearly 2,000 fewer classes in grades K-8 and 1600 fewer classroom teachers. Meanwhile, the number of high paid administrators and out of classroom positions has mushroomed.

The case studies in the latest audit are particularly interesting. One school 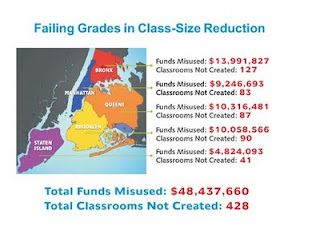 The administration’s response to their failure to properly monitor the use of these funds? That the program has “ceased to exist.”

However the Early Grade class size reduction budget allocation memo is still listed on the DOE website for FY 2010 as an "externally restricted" program. The full budget memo is here, with specific rules that are supposed to be followed -- rules that according to this audit, were flagrantly violated.

Moreover, the city promised to the state to continue the program, even after it was formally folded into the Contracts for Excellence (C4E). The DOE stated as part of its C4E plan that "the Department continues to be committed to reducing class size in early grades via the Early Grade Class Size Reduction program."

Here’s another, equally creative response to the audit, from Joel Klein, on WNYC radio:

“KLEIN: We've put all the state money, we got lots of state money for that and it's all been put into lower class size. People say, well last year it went up a few tenths of a point or something like that, but last year we had budget cuts.”

What? They have never spent the state funds appropriately and in fact, the city is a serial offender when it comes to class size. See this summary; and these charts, showing the large increases by district throughout the city last year, particularly in grades K-3.

Check out how your district did. Click on the chart below, for visual evidence that there was no relationship between the scho 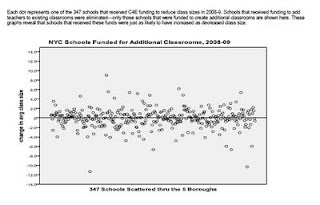 ols that received C4E funds to reduce class size, and those that actually did.
Yet more broken promises to our children.
Smaller classes remain the top priority of parents, according to the DOE’s own surveys. The state’s highest court said that NYC children have been deprived of their constitutional right to an adequate education because of excessive class sizes. Class size reduction is now a state mandate, and yet the DOE continues to violate the law, with little or no compunction. In fact, last school year, class sizes increased by the largest amount in ten years.
We will be asking the state to withhold any more C4E funds from NYC until the city actually follows through on its moral and legal commitments to our children and reduces class size.

Does anyone know why the UFT leadership is not screaming their heads off about this?

The c4E plan is a total joke. State law requires that the funding is SUPPLEMENTAL. In fact c4e money is not supplemental. Last year, when the City Council and the Mayor negotaited the restoration of budget cuts, schools either received C4e money OR ADDITITIONAL tax levy money! In fact, the neediest school dont really want the C4e money and would prefer the tax levy money because schools do not pay fringe benefits on tax levy money. The city has effectively hid this by obscuring thi s years fair student funding formula. They rolled over the amount of FSF money a school received last year and merely made register adjustments plus or minus. This obscures the fact that the FSF formula is NO LONGER a transparent formula. By very definition, this plan should be rejected. It is illegal.