More on Steve Brill's imperviousness to the facts 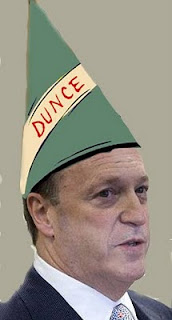 Steve Brill wrote a pro-charter article in the NY Times Magazine , comparing the results at PS 149 and , the charter school that shares its building. Brill implied that they served the same sort of students. These were his exact words: "Same building. Same community. Sometimes even the same parents."

Last week, Brill responded to online questions at EdWeek; one concerned the claims he made in his NY Times article:

Mr Brill, given the importance of these issues and the crisis in funding for public education today, I was troubled by the unbalanced nature of your recent NYT Magazine cover story. Specifically, Where was balanced discussion of conflicting research on the diversity of the charter school movement, showing that many charter schools - even in new york - underperform district schools; that charter schools enroll significantly smaller proportions of ELL and SPED students than district schools; and that some charter schools do counsel out students, in which cases declining cohorts of students correlate powerfully with increasing test scores? Where was serious discussion from experts on both sides of the education reform divide of the inadequacy of standardized testing as a metric for evaluating student and teacher performance? ....

This is how Brill responded:

The way i stepped through that debate was 1) to acknowledge clearly that not all charters schools are good for kids (didn't you see that statement?); and 2) to use a building that had two schools in it -- one a charter, one a traditional public school -- and compare expenses and results side by side. I labored over this, and think the comparison is valid FOR THOSE TWO schools. And taxpayers pay nothing extra for the school choice that these two schools provide, so i don't understand you statement that the government is using "valuable funding as a stick to spur undemocratic reforms." Choice is usually thought of as being pretty democratic. As for empirical evidence, one thing is clear, we keep spending more money than all other countries with worse results. And the charter i spent time examining spends less with better results.

First of all, nowhere in his article or the above is it mentioned that Eva Moskowitz raises millions of dollars for her schools. According to this spreadsheet, she raised $2.4 million for her four charters in 2009, and pays herself a very hefty salary.

Secondly, it is clear that Steve Brill still hasn't learned a thing.

Numerous blogs have shown since the publication of his article that these two schools have widely different student populations.

Valerie Strauss in the Washington Post, The Answer Sheet - Charters vs. public schools: Behind the numbers; Kim Gittleson in Gotham Schools, Brill-ing Down: Adding to Steven Brill’s NYT Magazine Report, and I at the NYC public school parent blog, Journalistic malpractice at the NY Times, have all pointed out in detail the disparity in the sort of students enrolled in Harlem Success Academy compared to PS 149; and how the charter school enrolls far lower numbers of free lunch, English language learners, sped students with serious learning disabilities, and homeless kids.

Here are the figures side by side (taken from each school's NY State report cards from 2008-9, Kim's analysis of sped reports and homeless figures from here and here):

Apparently, Brill is impervious to correction, with PS 149 serving many more poor students, five times the percent of LEP students, twice as many seriously disabled students, and ten times the number of homeless.

Taking a closer look at the state report cards, I also examined the data relating to teachers and staff:

What’s so interesting about this? HSA had twice the teacher attrition than PS 149 in 2007-8 (the latest available data); with fully half of all teachers turning over that year.

This is not the sign of a good working (or learning) environment. Apparently as a result of this high level of attrition, 30% of HSA teachers had less than 3 years experience in 2008-9– compared to 20% at PS 149.


Compare that with 41 teachers at PS 149, with only 7 other professional staff. I don't know who all these other “professionals” are, whether they are administrators, fundraisers, PR flacks, or people who actually provide instruction or services to kids; but so little proportional investment in classroom teachers seems to me an indication of poor educational priorities.

They are really great .
Some new style Puma Cat shoes is

in fashion this year.
The Nike Air Shoes is a best Air Shoes .
Red Shox is good and Cheap Nike Shoes.
If you are a fans of Puma basket,we

would offer the good and Cheap Puma

Shoes for you .the nike shox