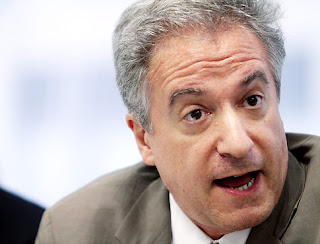 See today's Juan Gonzalez column here, about the backdoor deal made nearly seven months ago between State Education Commissioner Steiner and Joel Klein, to allow the city to nullify its legal and moral commitments to reduce class size, and to let class sizes increase this fall to any levels they like, while continuing to call this a “class size reduction plan”.

I made the letter available to Juan Gonzalez, because it had been kept secret up to now, despite the transparency and public process required before the city can amend any aspect of its Contract for Excellence and/or class size reduction plan.

Even more importantly, this deal makes a mockery of the entire notion of class size reduction. It clearly contradicts the language of the C4E law, passed in 2007, mandating that NYC reduce class size in all grades, in exchange for receiving over $2 billion in state funds. Rather than the full public disclosure promised, and the tracking of every dollar to ensure that it would be spent according to its specified purpose, the Contract for Excellence program has become yet another slush fund for the DOE.

Despite receiving billions from the state, class sizes have risen sharply the last two years, and are expected to rise even more sharply this year. After Class Size Matters, the UFT and others filed a lawsuit last January in the State Supreme Court against the DOE for its failure to reduce class size, the DOE went behind our backs and negotiated this secret deal, which apparently even the Board of Regents have not been aware of until now.

In the Campaign for Fiscal Equity case, the state’s highest court concluded that our children’s constitutional right to an adequate education had been violated, in large part because of excessive class sizes. The State Education Department, as a result of its negligence and active collaboration with DOE, has shown itself to be a willing partner to this continuing violation.

SED, by the way, has still not posted the city’s approved class size reduction plan for last year (2009-2010). When I asked the state last spring why the plan was not posted, contrary to the regulations, they put me off, and first claimed it due to technical difficulties with their website. When weeks went by and the city’s plan was still not posted, they admitted to me that someone high up in the State Education Department did not want to make it public. When I was forced to FOIL the plan, they ignored my FOIL and I finally had to threaten to sue.

They finally relented, and on Sept. 14 sent me a long document, originally submitted by DOE in October 2009, full of the usual obfuscation and gobbledygook. To add insult to injury, they followed up with another email three days later, saying that what they had just sent me was just a preliminary draft and not actually the city’s final approved plan for 2009-2010, which they have so far been either unable or unwilling to provide. So much for the accountability, transparency and oversight that is the state’s fiduciary duty under the law.

The secret letter signed by Steiner and Klein in February that Juan writes about today is posted here; the city’s apparently unapproved class size reduction plan for 2009-2010 is here; and here is a summary of all the billions of C4E dollars the state has thrown at the city since 2007, and apparently intends to continue to provide, despite the city’s long string of broken promises and now open defiance of the intent of the law. Finally, here is the DOE’s recently posted C4E presentation that first tipped me off to the existence of this secret deal.

There are CEC hearings on the city's C4E happening this week and next. I will provide a sample resolution soon concerning this moral and legal outrage that you can forward to your CEC or other organization to consider passing. Thanks for your support during these dark days, as always.

Here is an interview I did with WBAI on this today.

Thanks for bringing this to light.
--parent of 4th grader who shares her classroom with 29 other kids

This story is very disturbing and for several reasons. The fact that the state commissioner approved this in a back door agreement sheds suspicion on his ability to engage parents and advocates in an open and honest collaboration. Class size infractions will be higher than at anytime since the early 1990's which will further handicap New York Students. Finally, the mayor announced even more budget cuts to schools 2.7% I believe. How will schools still offer programs and maintain even higher class size registers the highest in the state? Very upsetting I feel for the children and the parents.

st uunbelievable and sorry to say what else is new. It is not "children first" but "children last".

This is horrible! I haven’t seen classes this overcrowded in more than a decade, and with more cuts coming, every dollar should be spent on hiring more teachers to reduce the class registers.


Let’s see. I had 30 seniors today for a writing class. Out of the 30 students, 5 of them were throwing papers at each other. Three of them ran out of class without permission and came back into the room with chips from a vending machine. One refused to put even a word on the page and kept talking about “Mary Jane.” Another refused to put a word on a page even after 15 minutes of conferencing with him. One said loudly, I can do this *!&% at home, I ain’t doing &*&% here. Then let’s see, one of them in the prewriting exercise wrote about the first time he “pulled a gun and a knife on someone.” Then about 10 others simply refused to do the work at all. About 7 of them actually did some work. It’s a complete struggle. I’m waiting for Superman since he’ll probably get here before small class size. If I had 10 or 15 of these kids, it would be doable; but 30 high-needs kids is impossible. In the meantime, let’s continue to hire talent coaches and administrators.

Well, if that's your opinion, I can't argue you.