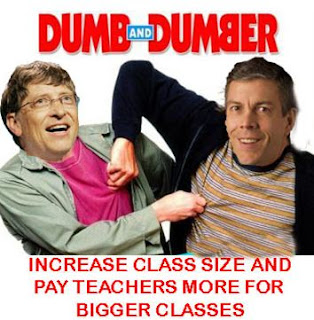 On Saturday, Arne Duncan warned governors about ‘dumb’ education cuts and then suggested even dumber cuts, like increasing class size:

“Duncan also said that states should think selectively about increasing class sizes. The father of two grade-school-age children said he’d rather his kids be in a bigger class with a better teacher than a smaller class with a lousy one. He suggested teachers could get paid extra for getting a bigger class…”

Now can anyone explain how that would help kids? Pay teachers more to teach more students, each of which would get less attention and and a lower quality of education? Talk about paying more for less.

Meanwhile, the Institute of Education Sciences, the research arm of the US Department of Education (which he heads) points out that class size reduction is one of only a handful of reforms that have been proven to work through rigorous evidence.

Duncan, whose speech was peppered with references to “you guys”… is popular even with many conservative Republicans….Sixteen governors listened to his speech, which followed a presentation from the head of the Indicators and Analysis Division at the Organization for Economic Cooperation and Development. The OECD official said the U.S. is trailing other developed countries on a host of important measures. Ontario, Canada, was held out as a model.

Except that Ontario has reduced class 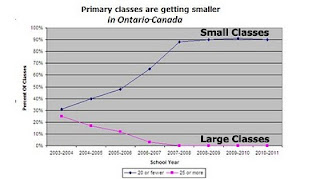 size systematically since 2003 across the province – just as Finland did, decades earlier, propelling that country to its success.

Click on the chart to the left for class sizes in the early grades since 2003 in Ontario -- the opposite direction NYC schools and others throughout the nation have taken since then.

In today's Washington Post, Bill Gates took up this same dumb refrain -- with a vengeance. He again suggests that class sizes should be increased, and makes the following claim:

In a 2008 survey funded by the Gates Foundation, 83 percent of teachers said they would be happy to teach more students for more pay.

Actually not! What the survey showed is that many teachers would take a $5,000 pay increase instead of a reduction in class size of two students per class – which is very different from preferring an increase in their class size.

Not to mention that in survey after survey, teachers say that the best way to improve their effectiveness would be to reduce class size – over salary increases, merit pay or any other policy. (For example, see this national survey from Public Agenda, “A Sense of Calling: Who Teaches and Why,” in which 86% of teachers said that reducing would a "very effective" way to improve the quality of instruction, far above increasing salaries, more professional development or any other method cited.)

In today's oped, Gates also claims that “After the first few years, seniority seems to have no effect on student achievement.” This is completely erroneous. See our fact sheet on teacher experience; showing student achievement gains are correlated with as much as twenty years of teaching experience.

In fact, as research reveals, there are only two observable, objective factors tied to more effective teaching – class size and more experience. And it’s very sad that Gates and Duncan -- along with the other corporate privateers -- are attempting to undermine both.

February 23, 2011 (GBN News): No one can accuse Muammar Qaddafi of failing to take the long view. Even as he fights for his political and perhaps literal life against a spreading democracy movement, the Libyan strongman announced today that he is forming an advocacy group called, “Despots for Education Reform”.

Mr. Qaddafi is said to have been impressed with the educational policies carried out in the US by such figures as Michael Bloomberg, Joel Klein, and Arne Duncan. “It’s not just that they exercise a form of total control that Qaddafi can only dream of,” said a spokesperson. “But he feels that the earlier children are exposed to dictatorship, the more likely they are to continue to accept it later on.” The aide went on to say that Mr. Qaddafi hopes that even if he cannot hold onto power in Libya, he could at least be tapped to head up a major US school system.

The Libyan leader may have competition, however. Eli Broad’s Superintendents Academy reports a dramatic spike in admissions, said to be due to the enrollment of a number of world leaders hedging their bets against the democracy movements in their countries. Mr. Qaddafi also could run into legal problems stemming from the use of the initials “DFER”. But when told that the initials were already being used by Democrats for Education Reform, he is said to have responded, “There’s a difference?”
Posted by Gary Babad at 2/23/2011 11:25:00 AM 7 comments:

No more education cuts to our schools! our children can't afford them 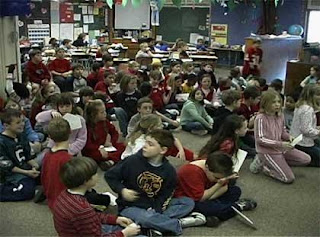 Over the last few years, public school budgets in New York City have been cut at least four times – and our children are suffering. The results have been sharp increases in class size, and the loss of many valuable afterschool, arts and tutoring programs. In the early grades, classes are now larger than they have been in more than a decade.

The Governor has proposed to cut education by $1.5 billion statewide, on top of last year’s cuts of $1.4 billion. More than half a billion dollars would be slashed from NYC schools. These would amount to the largest education cuts in state history. The mayor has proposed eliminating over 6,000 teaching positions, which would likely increase class sizes to levels not seen in a generation or more.

These education cuts are opposed by 60% of NY state voters. In order to protect our children from more educational damage, please sign a petition now, urging the Governor, the State legislature, the Mayor and Speaker Quinn to adopt the following proposals:

Bayard Rustin on the importance of class size Bayard Rustin (1912 –1987) was an American civil rights activist, important largely behind the scenes in the civil rights movement of the 1960s and earlier. He is credited as the chief organizer of the 1963 March on Washington for Jobs and Freedom. (from Wikipedia)

Rustin also gave a renowned speech in 1964 in Santa Barbara, entitled "Negro revolution in 1965." The whole speech is worth listening to, but one of the topics he spoke about was class size in NYC public schools. He thus is one of many brilliant individuals who realized the importance of this issue, along with Maimonides, John Dewey, and Kurt Vonnegut. Here is an excerpt:


The school system of this country is a bad school system for many reasons, but one of the reasons in our large cities, take Harlem for an example, teachers teach three sessions within the regular period. They become cops, they become babysitters, they become nursemaids.

Let us, therefore, elevate them to assistant teachers, the state gives them $4,000 a year, they go into the school, and they take from the teacher all of this police work and babysitting work. And the teacher is, then, if we can get many more schools built, if we can get smaller classrooms, I mean a smaller number of children in classrooms, these people can play a very vital role.