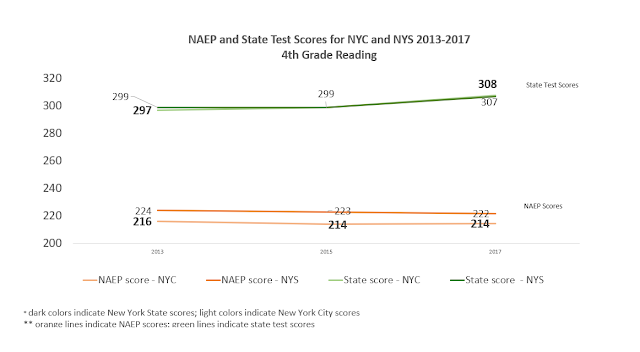 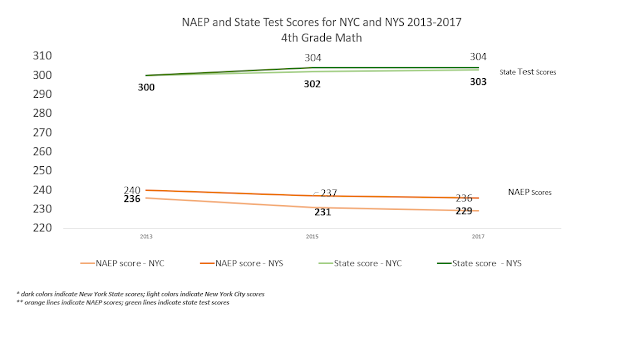 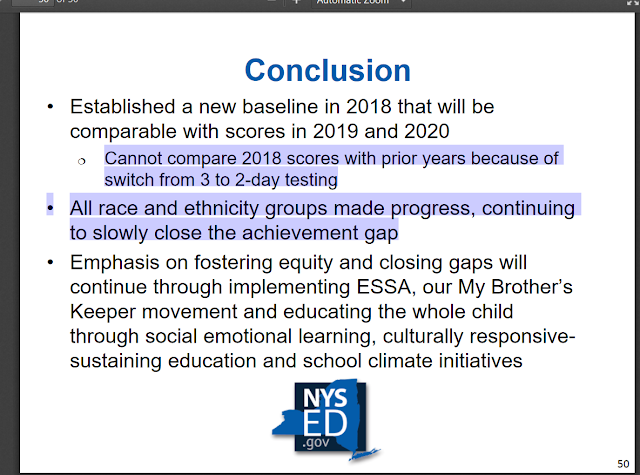 
Sorry to say I won't trust the state test results next year either.  We will have take those scores with several handfuls of salt too -- and wait for the 2019 NAEP scores to judge their reliability.
Posted by Leonie Haimson at 9/26/2018 05:27:00 PM No comments:

Check out our previous blog post on the current busing problems here.


We in PIST NYC have been saying for eight years that school transportation is run by the wrong people. The fact that the Chancellor has denounced one company and fired the top Office of Pupil Transportation executive is refreshing, but our children’s safe travel and access to education remain at the mercy of companies and executives whose first priority is money.
Any true overhaul would not just change some faces, but would change the structure and empower the real stakeholders in school busing: the disability community; families of riders of all income levels, races, and languages; the workers who drive and attend to them; educators.  Each of these already have organizations that represent us.
For years, these stakeholders, along with civil rights lawyers, have stated practical methods for fixing everyday school bus route problems. Parents to Improve School Transportation and Amalgamated Transit Union local 1181-1061 have been advocating for a School Bus Bill of Rights to prevent route problems systematically.
These suggestions are all on record; we have documentation from various City Council hearings, proposals raised to the now-Mayor and now-Public Advocate by Attorney Norman Siegel, notes from multiple parent discussions with Office of Pupil Transportation Director Alexandra Robinson, and a study paid for by the Department of Education itself. Further, at a 2013 mayoral candidates’ forum, Bill DeBlasio agreed to: “an independent commission on school busing, with representation from disability advocates, unions, and parent groups, on standards for bidders, routes, safety, training, and fair labor practices.”  Was Chancellor Carranza advised of any of this?
What is missing from most coverage of the scandal is this: The sad state of New York City school busing got worse after Bloomberg’s administration undermined the Employee Protection Provisions (EPP) that the union had won fair and square.  The companies are impelled to use strict cost-cutting to lower their bids for DOE/OPT contracts; they offer worse pay/benefits and conditions to school bus drivers, attendants and mechanics; hundreds were made jobless or found retirement more appealing; the result is a shortage of trained, experienced bus professionals. [Indeed, a cohort of school bus companies has been in court lately, trying to eliminate EPP altogether against the testimony of parents, workers, and one or two other companies. If they win, we expect more of the same. Even if they lose, these proceedings stall the start of new route contract bids; so OPT recently extended contracts that in theory might not have been renewed otherwise.]
No wonder school bus routes are doubled-up and miserable this Fall! Consider it on a small scale: Any time there is only one driver willing to tolerate a low wage job--where there used to be two drivers enjoying a secure career, that’s when students get picked up late or not at all, have routes which stop at four schools instead of one or two, get yelled at, or worse. When there is little to no investment in climate control or upgrading of vehicles, that’s when children get dehydrated, or their car seats or wheelchairs do not attach properly, or the bus breaks down.
Multiply this by thousands, and you will understand our doubt that merely removing CEO Eric Goldstein or Grandpa’s Bus would make all 150,000 riders safer (We also think the figures and emphasis on background checks are overstated to sensationalize rather than solve the problem).
Any true overhaul of school busing would have a long term goal of public ownership of the bus yards, to stop a chunk of our tax money in the busing budget from going straight to profit for individual companies--to spend it instead on upgrading and “greening” the vehicles. We look forward to civil service-type standards for regulating employee recruitment, training, and retention.
In the meantime:

As always, we urge all NYC communities and labor to get involved in our campaign for a School Bus Bill of Rights.  For more information, please write to pistnyc@gmail.com
http://www.pistnyc.org/  https://www.facebook.com/PISTNYC/
For information in fluent Spanish, please contact https://www.facebook.com/groups/221709251868819/
--  Parents to Improve School Transportation
Posted by Leonie Haimson at 9/26/2018 03:36:00 PM 1 comment: