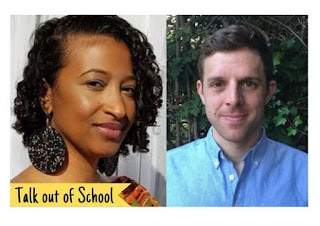 Check out the latest #TalkoutofSchool with AQE's Jasmine Gripper on what state budget deal is looking like for NYC & MS principal Michael Perlberg on challenges faced by his school this year & what students should be offered next year to help them recover & reconnect.

City Council education budget hearings were held today.  The DOE offered no plans or thoughts on how to spend the additional $6B or more they will get from the federal government over the next two years. When Education Chair Treyger asked Chancellor Meisha Porter about the potential of reducing class size to strengthen academic and emotional support and creating stronger bonds between teachers and students, she said there were other ways to achieve this and that class size was "a contractual matter."  Disappointing. You can watch today's hearings here, in Virtual Room 2.

See our testimony below, advocating for a big chunk of the federal funds be used for smaller classes below for the sake of health, safety and to address the damage done by more than a year of remote learning.

Please help us get smaller classes for NYC kids! Please sign our petition and testify on Tuesday!

Class Size Matters and NYC Kids PAC are advocating for one billion dollars of the approximately $2.5 billion in extra federal funds that NYC schools are due to get next year and the year after to be invested in smaller classes, for NYC students who will need them more than every before. This is a chance in a lifetime opportunity to ensure that enough funding is spent the right way to make a huge opportunity for NYC kids.   For more information, take a look at the fact sheet below.

If you agree, please sign our petition here; and sign up to speak at the Council's Committee on Education preliminary budget hearings next Tuesday March 23; public testimony via video starts at noon. You can sign up here at least 24 hours beforehand and/or send your testimony to testimony@council.nyc.gov up to 72 hours after the end of the hearing. Please copy the email to your own City Council member; you can find their names and emails by filling in your address here. Feel free to copy us at info@classsizematters.org

Here is sample text you can use, but please add any language you like: Hello, my name is ____ and I have a child in the ___ grade in [name of public school.] Please allocate one billion dollars of the federal funds for next year to class size reduction so that students can have the benefit of both social distancing and stronger academic and social support, which they will need next year more than ever before. Please make sure that happens, for the sake of my child and the other children in the NYC public schools. Yours sincerely, Name, address, email

Letter from members of Congress to Sec. Cardona asking him to waive the tests; and how to have your voice heard


See the letter sent today by members of Congress to our newly-confirmed Secretary of Education Miguel Cardona, asking him to grant waivers so that states do not have to give students the federally-mandated exams this year, in the midst of the pandemic.  This letter was spearheaded by newly-elected Representative Jamaal Bowman from the Bronx and Westchester, and a former Bronx middle school principal.  More on this here.

On Feb. 22, the  letter from the US Department of Education, rejecting state waivers before Sec. Cardona even took office was signed by Ian Rosenblum, an acting assistant secretary for elementary and secondary education and the former executive director of the pro-testing organization, Education Trust-New York.

As Rep. Bowman points out, “Mr. Rosenblum, with all due respect, has never been a teacher or school administrator in his life, and it’s important that our parents and educators know that these decisions are being made by people who do not have the experience to make those decisions. That’s unacceptable in and of itself.”

A few days ago, Diane Ravitch posted on her page a list of the organizations that signed a previous letter on Feb. 3, urging the US Education Dept. not to grant waivers for testing.  This letter was led by Rosenblum's previous employer Ed Trust.  Diane also including information we had gathered on the many millions of dollars these organizations had received by the pro-testing, billionaire-led Gates and Walton Foundation.  She also posted the list of organizations and the millions of Walton and Gates funds given the organizations that signed onto a press release on Feb. 23, also led by Ed Trust, posted the day after Rosenblum rejected the waivers, urging the Department not to grant states any flexibility in this regard:

"The Department must not, as part of its promised state-by-state “flexibility,” grant waivers to states that would allow them to substitute local assessments in place of statewide assessments or to only assess a subset of students.

If you want to have your voice heard over the insistent shouts of the billionaires and the groups that they fund, you should call the US Dept. of Education at 800-872-5327 from 9 AM-5 PM; press #3, and tell them to cancel the tests.

By law, the DOE is supposed to report on class sizes twice a year, the first time on Nov. 15 and then again on Feb. 15. We had heard from parents of egregiously large classes sizes this fall for many students engaged in remote learning of sixty students or even more, either full-time or part-time. See articles in NY Post, WSJ and Gothamist about this issue.

So we realized it would be important for the DOE to report on disaggregated class sizes, i.e. in-person, vs. full-time remote, vs. part-time remote for blended learning students. On Oct. 28, Council Member Mark Treyger, chair of the Education Committee sent a letter to DOE, urging them to make the legal deadline of Nov. 15 and provide the disaggregated data. His letter is here which a Chalkbeat article reported on.

At a press conference on Oct. 26, Chancellor Carranza said that schools had been reporting attendance to DOE in "literally three buckets of attendance every single day": in-person classes, remote blended learning classes, and full-time remote classes. So reporting the class size data in these three separate categories should not have been difficult for them to do.

In late February, more than three months after the legal deadline, the DOE finally posted on the Infohub site links to another Open Data site that alleges to report on class size data as of Nov. 13, 2020, with aggregate average data that appears to be inaccurate. Based on our analysis of the initial data, we calculated the following averages for each grade level, which if true would show DOE achieved the far smaller class sizes called for in their 2007 Contracts for Excellence plan:

Charts of the reported trend of average class sizes over time are here: Even factoring in the reported drops in enrollment, based on analysis of past data as well as speaking with teachers, parents, and students, we believe these figures are likely far lower than the reality. The DOE now says they will further delay any disaggregated data until sometime in March, which may be further delayed, given their past record, and may not be more accurate .

So that's why in the meantime, we are asking NYC parents, teachers and administrators to respond to our five-minute class size survey here.

Council Members Dromm and Treyger urge Congress to make sure while funding schools, NYS and NYC can't pull back their support at the same time

See the letter below, sent late last week from Council Members Danny Dromm and Mark Treyger, chairs of the Council Finance and Education Committees to New York Senators and our Congressional delegation, urging them to provide the additional funding our schools will need next fall to reopen safely and well, with the enhanced in-person support that students will require to recover from the huge losses they've suffered this year.

The letter also points out that the federal aid should be structured so that the state cannot simply cut education funding in the same amount as the additional aid districts receive from the federal government, as Governor Cuomo did last year with his "pandemic adjustment", cutting NYC's aid by nearly a billion dollars.

As the Education Law Center and AQE point out in a new analysis, Cuomo threatened to do this again in his new Executive Budget, by slashing state aid by over half of the $3.85 billion in federal emergency relief funds in the previous funding passed by Congress, the Coronavirus Response and Relief Supplemental Appropriations (CRRSA) Act, funding that was meant to respond to the ongoing impacts of COVID-19, not to plug holes in state education budgets.

At the same time, CM Dromm and CM Treyger also urged the Congress to make sure the city doesn't use these funds by withdrawing its support for schools as well:

" At the same time, include rigorous maintenance of effort provisions in the law, so that the city does not cut back on its own funding, as it is threatening to do with significant cuts to the budgets of as many as 60 percent of schools. This happened previously during the last economic recession in 2007, when during the first two years of the recession, even as the state and the federal government increased aid to schools, the class sizes of NYC students increased sharply, because the city cut its own funding at the same time. Sadly, class sizes in our public schools still remain significantly larger than before 2007, particularly in the early grades."

According to Education Week, the Biden plan does contain certain restrictions to ensure maintenance of effort on the part of states and districts, particularly in relation to their aid to high-poverty districts like NYC:

There would be similar conditions for districts’ limits on how much they could cut aid to high-poverty schools.

States would also have to agree to maintain certain levels of spending on K-12 schools in general in proportion to recent years’ spending levels, although they could apply for a waiver from that requirement.

Let's hope that these provisions stick and are strong and meaningful, given the propensity on the part of the city and state to take advantage of funds coming from elsewhere to pull back on their own support to public schools.