DOE to spend millions of dollars on new local assessments, starting in preK?

The DOE released a new set of RFP’s to testing companies to develop yet another set of “local assessments” to be given starting next year. [Apparently the 408 assessments bid out in July did not result in any contracts.] The bids are due April 23.  The announcement says that 24 contracts could result, for God knows how many millions of dollars. 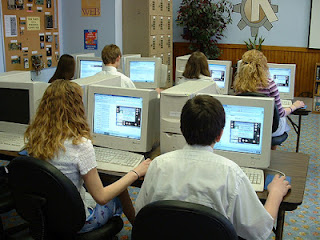 It is unclear how many local assessments will result from all these new contracts, but probably hundreds over three years. There are 23 testing “components” in all; with each component involving a "grade span" and a content area, and 40 items in each test, probably to be taken on computers, which will involve yet more millions to buy.
The DOE is pitching this new set of RFP’s to provide new sets of  “diagnostic” and “interim” assessments, but the only required part of the RFP is “end of course” exams, which is very difficult to argue is “diagnostic” since there will be varying amounts of summer learning loss for different students.  “Diagnostic” for what?  Next year’s exams?
In all, the RFP’s arouse suspicion that the DOE’s intention is to use them as more high-stakes tests, most probably as the “locally developed” portion of the new statewide teacher evaluation system, though the UFT has not agreed to this.  They can certainly be used for high-stakes decision-making as regards school closures and progress reports.  And there is little doubt that they will take hours more away from instruction, real learning, and important subjects like art, music etc.
The RFPs ask for ”end of course” tests, to be taken in all grades 3-12  in literacy and math, as well as science in grades 6-8.  Mandatory “task assessments” will be required for literacy and math in these same grades, plus preK-2nd grade as well.  We have never had standardized tests before in grades preK to 2nd grade, as far as I know.

“Optional” services to be bid out include end-of-course tests in literacy and math in 2nd grade; should include social studies and science texts as well, and the RFP docs also report that the DOE intends to implement separate assessments in social studies, starting in middle school and perhaps in other grades as well.

The DOE adds that “End of Course Diagnostic assessments are machine scorable [sic] assessments that align with the PARCC end of course assessments in content, design and structure. These assessments, given once a year, are intended to provide students and teachers with formative, CCLS-aligned data in advance of the PARCC assessments they are aligned to.”
PARCC is the multi-state consortium, including New York state, currently devising new exams to be aligned with the Common Core and implemented over the next few years.  The makers of these PARCC tests are developing at least nine new tests per year per grade.
If you have time, take a look at the RFP docs, which I have posted, and let us know what else you see there.  In any case, please leave your comments below if you think that millions of dollars of taxpayer dollars and education funds should be spent on even more tests, when our classrooms are being starved of resources, class sizes in the early grades are the largest in over a decade, and many schools are spending months on tests and test prep as it is.
RFPR0911Section3Appendices [pdf], RFPR0911 [pdf], AppendixGPricing-Required-Services RFP R0911 [xcl], AppendixGPricing-Optional-ServicesRFP R0911 [xcl]
Posted by Leonie Haimson at 4/01/2012 04:20:00 PM

This is extremely depressing.

I can't believe what I just read. Is this an April Fools joke?

It does match the rumor I heard last week that the DOE is no longer even remotely interested in looking at the results of the CC instructional bundles that every teacher in the system must do (Tweed had been interested in the work for months, but then suddenly told networks that they didn't want to see the work).

I would rather give up the 4% increase at this point. At least without a deal on teacher evals, the DOE will have no reason to give these tests and the students won't have to go through ANOTHER round of them during their school year.

Honestly; this is like watching a slow moving avalanche overtake your location.

To all who think this may be some sort of April fools' joke, I will assure you that this is in fact the way the $$$ is being WASTED in place of actually working toward EDUCATING our students in public schools here in New York City. Diane Ravitch refers to this utter waste as part of the agenda of the 'Billionaire's Boys Club', which would include our very own Bloomberg (Mayor), the Tweed/NYC/DEPT OF Ed and the crowd of overpaid Educrats who now occupy our public school system, making 'teaching' just about a test .... these guys are RUINING our schools, ruining the teaching profession, and leaving our kids doing NEARLY nothing else but work from nonsensical booklets (practicing for tests, multiple choice questions and coloring in circles on scantron sheets).... all part of a massive WASTE of our tax dollars to feed the sort of private 'connections' to the small group who has all but usurped the public education system in this city.

It has already been happening in Head Start for several years. A dear friend of mine left her job at Head Start because of this issue. Here's one of my recollections from my time there.... The DIAL was the name of the yearly assessment we had to give the kids. They probably use something else by now.

The idea of one right answer also trickles down to preschool assessments. I was the special education teacher in a blended model Head Start. We were required to give the children a beginning of the year assessment called the DIAL-R. One section involves asking the child to identify and explain the purpose of series illustrations of objects.
I was giving “Eloisa,” a bright typically developing 4-year-old English-language learner, the DIAL. I showed her a picture of the kind of thermometer used to indicate the temperature outside, and asked what it was? The drawing was of a long thin thermometer framed in black. She answered that it was for the bus. That answer confused me until I asked how it was used for the bus? She explained that it told what time the bus would come.
Bus schedules are posted in long thin black frames high on the bus stop signs in my city. The drawing of the thermometer reminded Eloisa of the schedules she seen her parents refer to especially looking up from her 3 ½ foot vantage point. I am certain that she would not have confused a real thermometer with a bus schedule. I am also certain that she had not encountered a weather thermometer before. She may have encountered a traditional body temperature thermometer, but those are not in black frames. Eloisa misinterpretation of the picture made complete sense.

This is why it makes no difference how much money is put aside for education in the state budget. The money will be wasted on testing,administrators at Tweed,outside consultants,and charter school expansion. Very little will be used to reduce class size or actually help educate our children. This is why I cringe when I hear we must agree to things like meaningless teacher evaluations or we will lose funding.

In all, the RFP’s arouse suspicion that the DOE’s intention is to use them as more high-stakes tests, most probably as the “locally developed” portion of the new statewide teacher evaluation system, though the UFT has not agreed to this.

How do we know what the UFT has/ has not agreed to in their back room deals?

Look back at all the crazy ed deform practices they have explicitly and tacitly " agreed to" over the last 10 years and tell me they are NOT in bed w/ the DoE and DFER style oppressors!
Being only jr partners makes them weak but not nor complicit.