Attention Parents - Get Ready for Another Surprise: More Field Tests in October 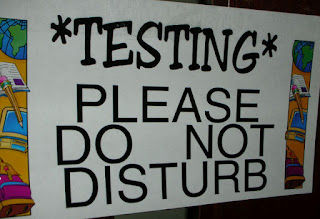 The following was written by Fred Smith, former testing expert for the NYC Board of Education. The list of 169 NYC schools in which another round of field tests  will be imposed raises more questions, such as how were these schools chosen?  And why do certain districts, like District 1, have nearly twice as many schools required to give them than other districts such as District 2, which is much larger?

Did you know that the New York State Education Department has assigned 169 schools to administer stand-alone field tests next month?  Your child may be in one of these schools and you will not be notified beforehand.
This is a repeat performance of the way SED handled the field tests that were given in June.  Most parents only learned about them at the last minute. While it was too late for them to ask questions, some of us found out, protested at several schools and boycotted the tests.
That’s why we're posting a list of the schools scheduled to be tested along with the grade level and subject (ELA or math) involved.  Otherwise parents won’t know in advance that their children will be tested.
Nor will they be told that the purpose of these exams is to provide the test publisher – Pearson, a profit-making company – with free data supplied by our children, enabling Pearson to assemble next April's statewide exams.
The field tests, which are not mandatory for children, are due to be given on October 23rd, 24th or 25th; the principal of each school selects the date.  And there will be still more separate, stand-alone field tests this spring.
Although your child may not be slated for field testing now, he or she is likely to be tapped in the spring and in the next few years, as Pearson’s contract calls for stand-alone field tests until 2015.
The parents and teachers of Change the Stakes object to these tests and SED’s blatant disregard of parents’ legitimate concerns:
Keeping parents in the dark, sacrificing learning opportunities to support commercial interests, turning our schools into testing labs and running our children through a measurement maze is unacceptable.
For information about which schools have been assigned to administer the October field tests, see the attached spreadsheet. To learn more about high-stakes testing and how to join those of us who are fighting back against test-driven education, please go to www.changethestakes.org .