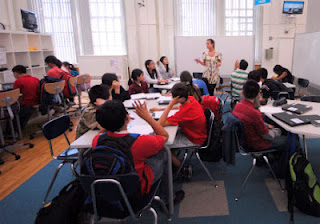 Meanwhile, of course, the DOE makes decisions about holding back children, and evaluates teachers and grades schools based on one year’s worth of test results – regardless of the sentiments expressed above.
These words of caution are similar to those expressed by a recent study of the Izone, DOE’s online learning initiative, of which the School of One belongs:
“….NYC school district leaders are taking risks with the iZone, implementing new models, committing deeply to a defined set of principles that challenge core assumptions about what a school should look like, and moving to scale very quickly. How and when they will know if they got the big bet right is a question district leaders will have to ask so that students are not subjected for too long to programs and schools that don’t work. “
There is a well-documented gold rush now, with many companies getting into the business of online learning, including Rupert Murdoch’s NewsCorp, headed by Joel Klein, which acquired Wireless shortly after Klein was hired.  With the help of the right-wing organization ALEC, of which NewsCorp is a member, these companies are using their considerable resources to fund astroturf organizations and persuade politicians to encourage or even require students to take virtual courses for credit, with NO evidence that this helps them in any way. You can read exposes about how this has happened in Maine; Pennsylvania; Minnesota Wisconsin and  nationwide.
Here in NY, the Regents and the State Education Department has encouraged the growth of online learning by eliminating seat time requirements which, along with the overriding pressure for high schools to inflate their graduation rates or risk being closed, will likely cause districts statewide to follow in NYC’s footsteps by implementing substandard credit recovery systems, what Diane Ravitch has rightly called “academic fraud.”
More and more in this nation, we are moving towards two different school systems: one for the wealthy, who insist of proven reforms including small classes for their children.   The other highly experimental model, for disadvantaged and even middle class kids, will increasingly deliver so-called “personalized” instruction via a machine, causing struggling students to fall even further behind.  Is this the future we want for our kids?
See also Jersey Jazzman’s blog here and here on how the superintendent of Perth Amboy, a controversial former NYC administrator named Janine Caffrey, has proposed a $575,900 contract for New Classrooms.  Meanwhile, Caffrey is serving only at the pleasure of Chris Cerf, Joel Rose’s former boss who is now NJ Education Commissioner, as the Perth Amboy school board has voted to remove her.
Posted by Leonie Haimson at 9/05/2012 02:54:00 PM

To Ms. Peterson: The students did not choose online learning; it was chosen for them.

In choosing the right education you must consider the quality of teachings, and online education is open to those who love to study online. It offers a great deal and performs advancement in terms of technology. So, what are you waiting for visit great website for the details.