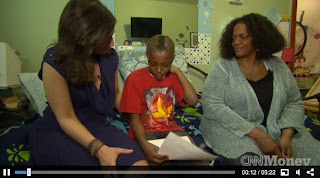 UPDATE: the CNN segment about inBloom has been moved to 6:45 PM tonight, Saturday instead.

A CNN story about inBloom Inc. was posted this morning and will be aired at 3 PM tomorrow, Saturday June 29.  I have also posted it below; please check it out.  It contains an interview with Karen Sprowal, NYC parent activist, a short excerpt from our Brooklyn town hall meeting, and comments from the CEO of inBloom Inc., Iwan Streichenberger.

This morning, the article accompanying the CNN video had a major error.  It quoted Streichenberger as saying that “the school districts themselves are the only ones with access to the data -- schools are forbidden from sharing the information, and third parties can't tap in.”

Actually, the whole point of inBloom Inc. is to gather as much personal student data as possible and share it with 3rd party vendors without parental consent – to help them develop and market their products.  But this error, as well as similar ones in the media, reveal how purposely obscure and confusing inBloom, the NY State Education Department and the DOE have been about their intent.  I was recently was forwarded an email from a Newsday editor, saying that she could not confirm that this data would be shared with any vendors, and that she believed that this was only a “rumor”.
After we contacted her, the CNN producer corrected the error and now the article says that “School districts control the data, though they may share that information with third-parties if they choose. (See correction below).”
Still, the CNN piece doesn’t discuss the inherent insecurity of storing this massive amount of highly sensitive data on a cloud, and doesn’t mention that the whole purpose of inBloom is to commercialize the data, so it can be shared it with as many vendors as possible.  It doesn't cite inBloom's statement that it "cannot guarantee the security of the information stored...or that the information will not be intercepted when it is being transmitted."  It also ends with an interview with Karen Sprowal, edited in such a way to appear that she would be okay with inBloom if only they had involved parents more in the discussion.
Actually, Karen responded that she was willing to consider that online learning tools could be helpful in some instances, but that the district and state must involve parents in the process. She, like most parents, remains strongly opposed to inBloom and to sharing any personally identifiable student data without parental consent.  Anyway, take a look at the CNN video and the article and leave comments on the site, where there is already a lively debate on these issues.
IMPORTANT UPDATE: Three companies, (DataCation from ConnectEDU, myTrack from eScholar, and Schoolnet from Pearson) have signed contracts with NY State to create data dashboards that will receive personalized student data straight from inBloom cloud.  The state is requiring that any district that received funding through “Race to the Top” must sign up with one of these companies in the fall.  They are also encouraging all districts and charter schools in the state to sign up with one of these companies, as well as contract with additional for-profit vendors that will offer “interoperable” software programs and receive data from inBloom.
Even the privacy of students in non-RTTT districts is at risk, since the state has indicated that they are uploading personally identifiable data for every public school and charter school student onto the inBloom cloud – whether their district intends to contract with any vendors or not. In fact, the entire NYS student data system is now apparently in the hands of inBloom Inc., now outsourced and privatized, with a governing board made up almost entirely of the Gates Foundation and its grantees, giving them incalculable power but no responsibility in case of breaches.
In this NYSED memo, dated yesterday, a schedule of meetings in August around the state about these data dashboards for school officials is included; I suggest that parents and others concerned about privacy find out where these meetings are being held from their school boards or superintendent, ask lots of questions and express their concerns – since the state has refused to meet with parents or listen to them up to this point.

More articles about inBloom have appeared in the last few days.  One is about two New York bills that were approved by the Assembly to protect student privacy, but failed to pass the Senate in the last weeks of the Legislature. Also see this article about a bill introduced in Massachusetts to restrict the sharing of this highly sensitive information.
Please send a message to your Senator and school board, expressing your concern with their lack of action, and asking what they will do to protect your child's privacy from being violated or abused.