There’s no accountability for anyone at the top at DOE; and I can prove it 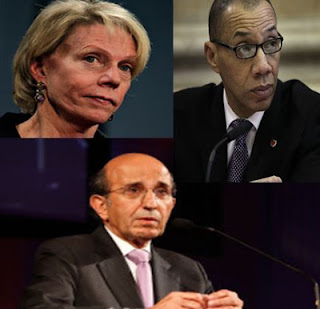 The testing companies Pearson and McGraw Hill can screw up over and over again – and  continue to get  million dollar contracts.  Principals rarely  get fired, and even those caught cheating are appointed “achievement coaches.”  Yet teachers and children are threatened with punitive sanctions – either with losing their jobs or being held back – if their performance does not improve fast enough.
Almost two years ago, NYC DOE gave their crude and unreliable evaluations of teachers based on test scores -- called the teacher data reports -- to the press, though they had promised never to release them.  All the daily papers promptly posted them.  Klein claimed he had no choice because they had been FOILed – though it was well known that he had asked reporters to FOIL them.

So in February 2012 – about 16 months ago – after the DOE released the TDR’s, I FOILed for the performance evaluations of the Chancellor and the other top officials in the leadership team at Tweed for 2009, 2010 and 2011.  More on my original FOIL request here.

According to Robert Freeman of the NY State Open Govt. Committee, the performance evaluations of all public employees in NY State are available to the public through FOILs, except for police, correction officers and firefighters.  In June of last year, the Legislature passed a law, restricting the view of a teacher’s evaluation to a parent with a child in the teacher’s class.  Mayor Bloomberg went ballistic, and said he would  have every school call every single parent to tell them they had the right to this information, and would post the ratings on ARIS.
After waiting for more than a year, the "final" response to my FOIL finally came back from DOE about a week ago: that there are NO written performance evaluations for ANY of the top officials at Tweed  for 2009, 2010 or 2011, including the Chancellor:
“Diligent searches and inquiries for responsive records have been conducted as to any Chancellor (and his/her Chief of Staff) Chief Academic Officer, Senior Deputy Chancellor, Chief Schools Officer, Deputy Chancellor, Chief Operating Officer, Chief Financial Officer, and General Counsel for the time period covered y your request.  It is my understanding that no such records were located, because no such records have been created.  Accordingly, there are no records to provide.”
See the pdf here and the photo above for the complete letter.  DOE prides itself as operating like a business, but there is no corporation or organization that would fail to evaluate the performance of its top executives.
Instead, the educrats at Tweed are more like a petty dictatorship, whose workings are so dysfunctional and mismanagement so extreme that they would have been fired years ago, if there was any accountability at the top.
Posted by Leonie Haimson at 6/24/2013 05:54:00 PM

The hypocrisy here is stunning. Mike Bloomberg should hang his head in shame, if he ever had any.

What a great idea, Leonie! Every mayoral controlled school district should submit these kinds of FOI requests, and that should be done for the US DoE as well, to reveal how pervasive the lack of accountability is for the very people who demand accountability of so many others.

They continue to make blunder after blunder at Tweed with no one ring held accountable for their shoddy work. This occurs on all levels. Rather than bing held to the fire, Tweed continues to hire more hacks with no experience.

Anyone who is a teacher or administrator in the NYC school system knows the real grades of Mayor Bloomberg, his puppet Chancellor and the over abundance of staff at the Dept. of education. The only ones who have benefitted from their reign are his buddies who run charter schools and the companies that provided the high stakes tests and the test prep material that goes along with it. What a shame.