Nikhil Goyal on fire at One Voice rally in Albany today 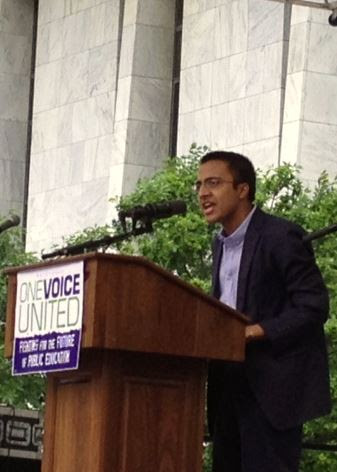 Here was one of the best speeches in Albany today, by teenage rock star/pundit Nikhil Goyal, announcing he will lead a statewide boycott of testing next year.
Good afternoon. My name is Nikhil Goyal. In January 2013, I graduated from Syosset High School on Long Island. I am a member of the No Child Left Behind and Race to the Top generation. My generation has been tested to an extent that is unprecedented in the history of this country, many experts have said. My entire school career has dominated by endless testing and a culture of "drill, kill, bubble fill."
My friend and educator Marion Brady once said, "Even if standardized tests didn’t cost billions, even if they hadn’t narrowed the curriculum down to joke level, even if they weren’t driving the best teachers out of the profession, they should be abandoned because they measure the wrong thing."
My fellow peers, from Portland to Seattle to Providence to Chicago to Newark to Philadelphia, have been walking out of school, protesting, and rallying against high-stakes testing, budget cuts, and the assault on public education. Whether it is gay rights, voting rights, civil rights, women's rights, in every successful social movement, it is always young people taking charge, leading the way, lighting the fire out of outrage within us all.
Wael Ghonim, one of the organizers of the Egyptian revolution, once said, "The power of the people is much stronger than the people in power." We may not be in the White House. We may not be in the halls of Congress. We may not be in our state legislatures. We may not be in the boardrooms of corporations. But we are in our classrooms and in our schools every day. And we have in power in numbers.
Next year, we are launching a student-led campaign in New York to boycott the ridiculous state teacher evaluation tests. Last year, I opted out of the tests. I left the Scantron blank and left the room.
Thousands of students will do the same.
It's time for our stakeholders to rise up and revolt. We will walk-out. We will opt-out of testing. We will boycott. We will protest. And we won't stop until our demands are met.
Nine-year-old Asean Johnson said at a rally to stop school closings in Chicago, "We are not toys. We are not going down, not without a fight."
To Governor Cuomo, Commissioner King, Mayor Bloomberg, Chancellor Tisch: We're coming for you. We're taking back our children. We're taking back our schools. We're taking back public education from your hands, from the hands of corporations, billionaires, Wall Street, and testing companies.
Wake the hell up. I'm not a stupid little kid. Do you hear me?