What a day!  I'm amazed at how quickly the idea we had for #protectourschools grew throughout the city.  When I first heard it suggested by Danielle Boudet, a parent from Oneonta NY and a steering committee member of our terrific statewide coalition NYS Allies for Education, I though it was a deceptively simple but wonderful idea: a symbolic action that all parents, students and teachers take: to link hands and protect their schools from Governor's attempt to defund, disrupt, and dismantle our public schools.

Unlike charter schools, of course, NYC public schools can't close for the day, and bus their kids and staff up to Albany.  It would be illegal, and we wouldn't want to cut short students' instructional time anyway.  But before and after school, I thought, it might be possible to enlist parents and teachers at perhaps 10-20 schools to take action, and if  everyone tweeted photos at about the same time, it might get some attention from the public.  Never did I imagine that 100-200 schools would participate, with such energy and joy and commitment.

Well, the idea took off.  The date of March 12 was set, and we emailed parents, suggesting they should organize this action at their schools.  The UFT subsequently emailed the idea to their chapter leaders as one among several actions they could take, but at many of the schools across the city, it  was really parents who took the lead in organizing these events.  This was truly a grassroots effort.

I started at the morning at PS 3 in Greenwich Village, where my daughter had gone to school and was thrilled to parents and kids lined up, almost surrounding the entire school, chanting "Parents and teachers united can fight em".

I went back home and started madly tweeting and retweeting  the hundreds of images that were coming through the internet from all over the city-- wonderful photos and videos of parents, kids and teachers, chanting, holding signs and singing, defending their schools from Cuomo's predatory attacks.  Just check out the twitter feed with the hashtag #protectourschools, or go to our Facebook page to see many of them.

Then I got an email that CM Dromm, the chair of the Ed Committee in the City Council,  was holding a press conference in the Red Room at 1 PM, dashed down there, where he and other Councilmembers were speaking out against the Governor's damaging privatization agenda.  CMs Dromm, Ferreras, Chin, Maisel, Barron, Treygar, Menchaca, Rosenthal, and Lander were all wonderfully eloquent about how we'd had 12 years of the Bloomberg axe of closing schools, ripping out the heard of communities, and expanding charters -- and here we were faced with these failed and damaging proposals all over again,.

I ran home, started tweeting again, and then joined the eloquent teachers and students from City-as-School who were gathered in Washington Sq. Park for a speak-out.   Teachers and students spoke about the importance of treating each other as human beings, rather than test scores or isolated pieces of data. One speaker, a professor from NYU whose name I didn't catch (if you know her, please add to the comments section below), quoted Che Guevara who said, "if education is not given to the people, they will have to take it."

A Detroit activist spoke about how his city had been devastated by the closing of hundreds of schools -- and that we should fight the Governor's policies that would do likewise.  I spoke about how Cuomo's proposal to send 250 more charters to the city -- each of which would be obligated to get free space and buildings at taxpayer expense - could prove to be a fatal blow to our public education system and could cost the taxpayer $830 million per year in annual payments for rent alone. 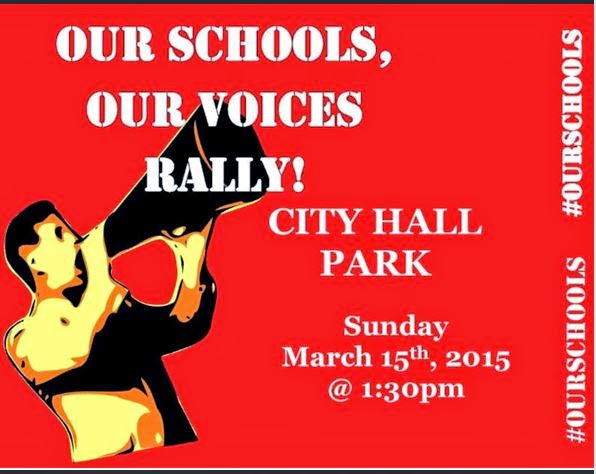 The speak-out wrapped up with a student singing the Bob Dylan song, "The Times they are a'changing" and another teacher who said this should be only the first of many protests.  And indeed there is a rally in City Hall Park tomorrow, hosted by Tish James, our Public Advocate, and another one in front of the Governor's office on March 28.

We got tons of press most of it good.  Some reporters who shall remain nameless implied that parents were just tools of the UFT; the Governor predictably called us "special interests" having a tantrum, which just shows how successful the day's events were. Right before he was run out of town on a rail, Commissioner John King also vilified parents as "special interests" who dared protest his high-stakes testing/privacy violating agenda.

My favorite videos from the day are below, including Tish James giving a wonderful civics letter to the parents and kids at PS 20 and Arts and Letters, and the PTA presidents of those schools explaining how they feel about Cuomo's proposals.

Below that is a great short video from Brooklyn Arbor, complete with musical refrain, and a video from PS/IS 87 in Washington Heights, where the famous Campaign for Fiscal Equity school funding case began,  and whose court decision the Governor is defying.  This one stars lead CFE plaintiff former CM Robert Jackson and the parent leaders at that school.

A+L - P.S. 20 HANDS AROUND THE SCHOOL from Frantic Studio/client on Vimeo.

GREAT TV NEWS STORY HERE! IF YOUR CITY COUNCIL MEMBER SPOKE UP, BE SURE TO THANK HER or HIM!