From Diane Ravitch - please give to Class Size Matters! 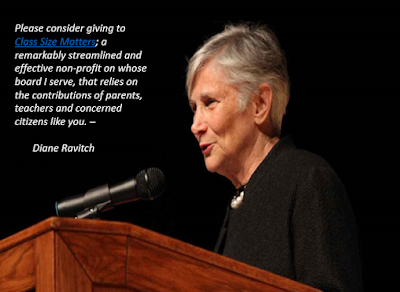 Please consider giving to Class Size Matters; a remarkably streamlined and effective non-profit on whose board I serve, that relies on the contributions of parents, teachers and concerned citizens just like you.

Your support will help the organization continue its work to ensure that all public school students in this city, state and nation are provided with small classes in uncrowded buildings, with sufficient individual attention from their teachers, and that parents can protect their children’s education data from breach and misuse.

First on privacy: In 2014, Class Size Matters spearheaded a successful state and national effort to defeat inBloom, the $100 million Gates-funded corporation designed to collect and share the personal data of students in nine states and districts. inBloom closed its doors in 2014 when NY State passed a law against it – the last state to pull out.

The Parent Coalition for Student Privacy, which Class Size Matters helped start after inBloom’s demise, is now leading the national effort to oppose the dangerous, Gates-funded campaign to overturn the federal ban against the US Department of Education collecting the personal data of public school students, from birth to preK through high school and beyond. If this ban were overturned, it could allow the federal government to track and create a dossier of sensitive information on nearly every American family – a dangerous threat to the privacy and civil liberties of us all.

As part of the 2014 law that caused inBloom to close, the NY State Education Department was required to appoint a Chief Privacy Officer who would create a comprehensive Parent Bill of Privacy Rights with input from parents and other stakeholders. This fall, Class Size Matters helped convince the NY State Education Department to finally appoint a Chief Privacy Officer as the law requires. The group also persuaded NYSED to rescind their decision to send all the personal data of the state’s public school students into the NY state archives, where it would have remained for up to a hundred years, vulnerable to being publicly released or misused.

Class Size Matters is also continuing to advocate for smaller classes and less overcrowding in our public schools. NYC added nearly a billion dollars to the school capital plan last spring to build more schools, in part because of their advocacy. The organization’s analysis revealed that the DOE had hugely underestimated the need for new seats. New reports and strategies to address the class size and overcrowding crisis in our public schools will be released this year.

In October, the NY Appellate Court ruled unanimously that the DOE must open School Leadership Team meetings to members of the public in a lawsuit in which Class Size Matters intervened. These teams, composed of half parents, are an essential part of the school governance system and have an important role in decision-making, and thus full transparency must be required. (A fact sheet that you can post in your schools or forward to parents and teachers is here.)

At the national level, given the priorities of Donald Trump and his pick of Betsy DeVos as Education Secretary, we must all work together to protect our public schools from privateers and profiteers who want to defund and dismantle our public schools. Supporting Class Size Matters is more critical than ever before, in the fight for adequate, equitable and well-funded public schools.

Please contribute to Class Size Matters. Your donation is fully tax-deductible.  You can send a check to Class Size Matters/124 Waverly Pl./ NY NY 10011 or click on the link here.  If you’d like the donation to go to the organization’s efforts to protect student privacy, please note that on the check or in the comment box online.