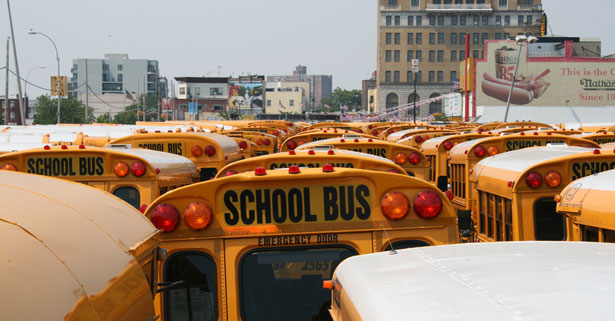 Update: see the statement from the Parents to Improve School Transportation.

The first week of school was dominated by stories about a major busing fiasco, with 67,075 hotline complaints from parents during the first four days, and many kids left on the sidewalk waiting for school buses which never came, as first reported by Ben Chapman of the NY Daily News.

Ben also broke the story that many bus drivers with criminal records had been allowed to slip through the cracks via faulty background checks, and that a retired police investigator had been let go by DOE for blocking too many hires with questionable records, while his signature was forged to the hiring documents.

As a result,  Chancellor Carranza fired Eric Goldstein, CEO of School Support Services.  Goldstein had led this massive fiefdom for more than a decade, where he controlled the spending of billions of dollars in vendor contracts for transportation, food and athletics.

This was a dramatic move by the Chancellor, as no one at that level has been fired at DOE in many years, at least in my memory.  Carranza also promised that from now on, the method for vetting bus drivers would be handled by the department's Division of Human Capital, with the same careful screening that DOE employees are subject to.

After the firing, Marcia Kramer of CBS News reported that Goldstein was already under investigation for questionable decisions regarding school food contracts: "The probe is said to focus on trips around the world taken by a number of school food executives that were paid for by food manufacturers."

Then Elizabeth Rose, who had already demoted from Deputy Chancellor to a new position called CEO of School Operations, was further demoted and re-assigned to become “senior contracts adviser for transportation," presumably to advise the new transportation head, Kevin Moran.  In April, Rose was said to have improperly overturned firings and suspensions of bus driver and attendants guilty of abusing children or leaving them unattended.  Rose will  keep her salary, however, of nearly $200,000 per year.

Rose was also responsible for making a secret agreement with Eva Moskowitz that she could move a new Success Academy charter school into PS 25 in Brooklyn - until a court order stopped the closure of PS 15.  If this move had occurred, it would have been illegal, as any change in school utilization has to be announced six months ahead of the next school year, and approved by the Panel for Educational Policy according to state law-- neither of which occurred.

Rose was also very dismissive of the importance of class size and school overcrowding, as typical of many educrats who were originally  hired by Joel Klein.  This was especially unfortunate as she oversaw school co-locations and the School Construction Authority.  Rose testified in April in response to a question from City Council Education Chair Mark Treyger that school overcrowding had no negative impacts on students, a claim that was subsequently contradicted by Chancellor Carranza in testimony one month later.

In previous hearing Eliz Rose minimized impact of overcrowding on education; do you agree? asks @MarkTreyger718. @DOEChancellor says when he had fewer students as teacher he could do so much better, with 20-25 vs 45 students; learning environment important but funding limited
— leonie haimson (@leoniehaimson) May 22, 2018

Today, Sue Edelman in the NY Post revealed that 24 staffers at the DOE Office of Pupil Transportation were provided with cars at city expense – including several employees who do little but drive their cars to and from their office each day. Included among them is a Rabbi, a “liaison to yeshivas” who has both a car and a personal driver paid for by the DOE:

Rabbi Morris Ausfresser, a liaison to yeshivas, who lives in Brooklyn. Another OPT employee serves as his personal assistant and chauffeur. “I can’t answer any questions,” he said Friday

According to the website See Through NY, Ausfresser has been working at DOE as an “Administrative Quality Assurance Specialist” for at least 11 years, and  received a salary of $101,873 in 2017.  (Since Sue didn't report the name of his “personal assistant and chauffeur” I'm unable to look up his salary.)

On twitter, I asked how many yeshiva kids get busing at city expense to schools that deny them a minimally adequate education.  According to Naftuli Moster of Yaffed, "The answer to your questions is: almost all boys attending Hasidic Yeshivas, especially boys. So around 30,000-60,000." (He later amended this to "almost all children, especially boys.")

In 2012, I published a blog post with a link to a spreadsheet obtained by CEC 31 President Mike Reilly through a Freedom of Information request, showing that a higher percent of private school students who request school busing for safety reasons had their waivers approved by OPT than public school kids.

Reilly's FOIL followed the elimination by DOE of middle-school busing in many areas of Queens and Staten Island that have no public transportation,  which may have contributed to the death of at least one public school student. (Reilly recently won the Republican primary for an Assembly seat for the South Shore of Staten Island, and is certain to be elected, as he's unopposed by any Democrat.)

After Mike received the data from DOE, then Queens PEP member Dmytro Fedkowskyj proposed a resolution to create an  advisory committee of stakeholders to oversee the process of granting safety variances to students, a committee that would include parent several CEC members.  The resolution was tabled after a contentious meeting by the mayoral majority of appointees on the PEP.

One of the DOE staff who has been provided with a private car is the OPT safety director, Paul Weydig,  who oversaw the faulty and likely legally defective vetting of bus drivers.  Weydig made a salary of $110,131  in 2017 - also as an “Administrative Quality Assurance Specialist” – a little more than Ausfresser.  Weydig’s wife also reportedly works at OPT, “Lisa D’Amato, a contract compliance officer whose unit rubber-stamped the questionable bus-driver applications," according to the NY Post article.

Weydig was cited in a Daily News article for questioning a decision to de-certify a driver with ten prior criminal convictions, including grand larceny, identity theft forgery and fraud.  He emailed the investigator who rejected the drive, emailing, "“What are you trying to prove here?”  This investigator, Eric Reynolds, was removed by DOE, apparently for flagging too many bus drivers with questionable records.

Busing has been a perennial problem at DOE.  One recalls how Joel Klein switched bus routes in the middle of winter at the behest of the consulting company Alvarez and Marsal, leaving kids shivering on corners and provoking huge outrage in one of the biggest blunders of his extremely bumpy record.  He actually apologized afterwards, an extremely rare move for him.

Carmen Farina was not adept in dealing with corruption or incompetence.  She pushed through a contract worth as much as a billion dollars with a vendor found to have engaged in a corrupt kickback scheme just a few years before , and refused to act for many months even when confronted with clear evidence of cheating or abusive educrats. (See the Governance section of the NYC Kids PAC report card for a summary.)

At this point, Chancellor Carranza seems to have handled the busing controversy with decisive swiftness,  at least compared to past administrations.
Posted by Leonie Haimson at 9/23/2018 07:25:00 PM