The latest on lead in school water: what are the results for your school and what should parents do? 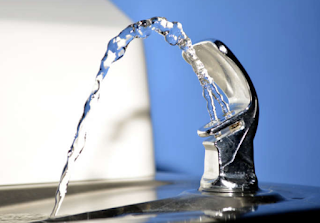 Update 9/16/18:  Today's NY Times has a letter from Claire Barnett of the Healthy Schools Network and Joan Leary Matthews of NRDC, urging the governor and state Legislature to lower the action level for lead, as there's no safe amount of lead in water that children drink.

Sue Edelman also has an update, detailing in the NY Post how a new fountain/bubbler bought with funds raised by students at the International  High School in Prospect Heights is already releasing lead above the action level, raising suspicions that lead may be in the pipes.  According to the mandated reports the DOE has made to the state, no pipes were replaced in any of the NYC public schools.

This week, several media outlets reported on the new results from lead tests in NYC school water in the New York Times,  Chalkbeat, and the Daily News.
The new data shows that 25% of schools still have at least one fixture with water above the “action” level of 15 parts per billion that requires remediation, compared to over 80% of schools before the latest round of remediation efforts began in last year.  The release of this data came after the DOE had refused to provide the updated retesting results for two weeks, and only after an article exposing the delay was published in the NY Post on Sunday.
A spreadsheet showing the new results for every schools sorted by district is posted here.  There are now 391 schools with 1165 outlets that released lead above the legal limit, compared to 10,633 outlets before.
To recap:  In response to the Flint water crisis, the NY Legislature passed a new law in 2016 that required all public schools to test their water every five years using the “first draw” of water, rather than flushing the pipes before testing, which lessens the amount of lead in the sample.  Any outlet with water above 15 parts per billion (ppb) would from now on require fixing until the samples fell below that level.
Still to this day, the DOE officials claim to reporters that they previously they used a “practice [that] was developed in a partnership with the federal Environmental Protection Agency” even though EPA guidelines for over a decade have said that the first draw should be tested for lead om schools, rather than after the pipes were flushed.  See 3Ts for Reducing Lead in Drinking Water in Schools, dated Oct. 2006:

Before the Flint crisis erupted, many schools hadn’t been tested for over ten years.  Moreover, the DOE was only testing buildings built before 1986, even though newer ones also had this problem, and were using the flushing method instead of the first draw, which more accurately measures how much lead is in the water that students drink at the beginning of the school day.
Yet DOE went through a new round of testing in the spring of 2016 by using the flushing method, and had found 1,341 elevated samples in 510 schools, with fewer elevated samples on the second draw.
After the new state law passed in June 2016, the deadline for testing all water outlets with the new, more accurate method was September 30, 2016 for elementary schools.  Middle and high schools were supposed to have completed testing by October 31, 2016.
In July 2016, the city sent out conflicting messages.  First, DOE officials said that “At every location where elevated levels persisted after a second test…it turned off the source of the water and then started making repairs or replacing the fixtures. “  A Mayoral spokesperson claimed that in the case of “any elevated sample, relevant fixtures and piping are replaced to the wall, and retested out of an extreme abundance of caution.”


Yet while most districts started testing their school water over the summer of 2016 using the first draw method, the DOE refused to do this until after the NY Times called them out on it on September 1, 2016, in a story that revealed that they were still flushing the pipes beforehand  (though the Times story and most news articles since still fail to mention the new state law.)
Even then, the DOE said they would “continue doing pre-stagnation flushing when it was necessary to collect samples on Monday mornings or over school holidays."  If and when the DOE abandoned this practice which ran counter to the law and EPA guidelines is unclear.
In any case, NYC officials didn't begin retesting schools according to the mandated method until late November 2016.  According to the new state law, schools were also supposed to post the results of all lead testing and any remediation plans on their website no more than six weeks after the school received the lab reports.  Yet as Sue Edelman reported, last week many school websites lacked these reports.
Not until April 17, 2017 ,  six months after the deadline, did DOE release results from testing school water by the required method.  Then they found 10,633 elevated samples in 1,278 or 83% of all public schools. See the DOE older spreadsheet posted here.
Now, after remediation, there are still 391 schools with elevated levels, with fewer fixtures – or 1,165  -- still releasing water above the action levels.  According to the DOE, additional unspecified efforts will be made to lower these levels or remove the outlets permanently.
But perhaps the most surprising finding is that there are now 42 schools where the most recent round of testing found more outlets with lead above the legal limits than before. According to the NY Times a DOE spokesperson explained this ”because the schools had added new fixtures.”  But from examining reports on the school portals, the real reason appears to be that more fixtures were tested in the second round than in the first.
Originally, only drinking fountains and fixtures like kitchen sinks where the water would be used for cooking were tested.  Subsequently, they apparently tested all “operational outlets”, including sinks in bathrooms and locker rooms etc.
According to the letter on its DOE school portal, Baruch IS 104 in Manhattan had only three out of 68 outlets that originally tested above the action level on Jan. 14, 2017.  Now 25 of 90 outlets are elevated. ( I have posted Baruch’s lab report here; but you can find it on the DOE school portal for every school under “data and reports” and then “facilities.”)  The highest amounts of lead at Baruch seem to be in water from sinks in the boys locker room.

For the names of schools where the new results find more contaminated outlets than before,  see the last tab on spreadsheet here.

In June 2016, the American Academy of Pediatrics released  new guidelines that schools should limit the amount of lead in their water to no more than 1 part per billion, as opposed to the 15 parts per billion mandated in NY state law. Why? Because as AAP stated, ”There is no identified threshold or safe level of lead in blood…No Amount of Lead Exposure is Safe for Children.”

Indeed, research has shown that children with blood levels even less than 5 micrograms per deciliter suffer from lower IQs , worse test scores, and higher rates of inattention, impulsivity and hyperactivity.

Here is a post I wrote earlier, citing evidence that there is no safe threshold of lead in water-- given that any detectable blood levels of lead in children are correlated with worst outcomes.

This includes a study by researchers at Yale and Brown called "Lead Exposure and Racial Disparities in Test Scores," showing that preschool children with very low levels of lead in their blood are likely to have lower test scores in subsequent grades in math and ELA.

According to the GAO, as of September 2017, seven states and DC require regular testing of lead in school water, with Maryland calling for re- testing every three years.    In NY, Sen. Michael Gianaris has proposed a bill that would require re-testing every three years in New York, instead of the current five.  DC law now requires annual testing in their public schools, as Dr. Marc Edwards, who exposed the Flint water tragedy, recommends.


As to the action levels of lead, Illinois requires that any school outlet that has any detectable level of lead in the water must be fixed;  and DC schools must remediate outlets with lead levels above 5 ppb.
Given this research, if I still had children in the public schools, I would send them to school with water bottles every day and urge them to drink from these sources rather than any school fixture.

My novice eyes just took a look at the Capital Plan for 2015-2019 and the proposed Capital Plan for 2020-2024 and I noticed that the remediation of lead in the water is no longer included in the mandated programs section of the budget.

In the earlier Capital Plan, on page 49/50 it says "In addition, the DOE continues testing schools for the presence of lead in drinking water and performs remediation when necessary. The water in every New York City public school was tested for lead in 2016. The vast majority of test results showed satisfactory lead levels. Drinking or cooking outlets that exceeded the action level for lead were immediately taken out of service, remediated, and not placed back into service until the outlet re-tested below the action level."

In the new Capital Plan this last paragraph has been removed!