Send a letter to the Mayor & Chancellor to end school overcrowding now! 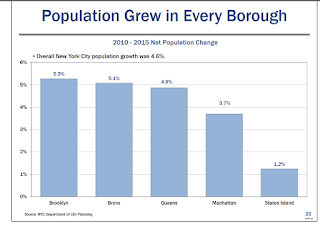 The next five-year capital plan for schools will be introduced sometime in the next two months. In Jan. 2017, Mayor deBlasio promised that he would fully fund the capacity portion of the new plan, to alleviate current overcrowding and address future enrollment growth.  Based upon a Nov. 2017 estimate, this meant adding at least 38,000 currently unfunded seats plus whatever portion of the 44,000 K12 seats in the current plan are as yet unsited and unbuilt.
As Chalkbeat reported, the addition of those seats will “largely alleviate the overcrowding issue we’re facing now,” de Blasio said. Devora Kaye, a spokeswoman for the city’s Department of Education, said that is in addition to the 44,000 seats already included in the city’s five-year capital plan.
We have real questions about the lack of transparency in DOE’s method of estimating the need for new seats, especially as over half a million NYC students are crammed into overcrowded schools, the city’s population is growing fast, and there is a residential building boom in all five boroughs.
In addition,  the current formula is based on census figures 20 years old, doesn't take into account the increased numbers of preK or charter school students occupying DOE buildings, and is aligned with even larger class sizes in most grades than the current average.
But we would like to keep the Mayor at his word at least in this regard.
Please send a letter to the Mayor and the Chancellor now, urging them to fully fund the number of seats needed in the next five year capital plan, as de Blasio promised to do.
The letter also asks them to front-load the plan and build these schools quickly and within five years.  Right now the vast majority of the schools in the current five-year plan won’t be completed until 2022 or later. As of last spring, nearly one third of all funded seats had no sites and only a small number of seats in the “class size category” added to the plan five years ago have even been identified.

There is more information below, describing four very basic bills and two resolutions that were approved in the City Council on Sept. 12 in an attempt to make school planning more transparent. Not one of them should have had to be passed – but the fact they were is yet more evidence of how resistant the DOE and the School Construction Authority have been in the past to improving transparency and to working with parents and elected officials to solve this chronic problem which has only worsened in recent years. But please send your email to the Mayor and Chancellor now, by clicking here.
Thanks, Leonie

New Legislation and Resolutions:
Intro 449-A: requires the School Construction Authority to publish subdistrict maps online.
Intro 461-A requires Department of Citywide Administrative Services to notify DOE/SCA when city-owned or leased property of an adequate size for a school is has no current use (but for some reason, not to communicate this properties to either elected NYC officials or parents, who in the past have been primarily responsible for successfully pushing DOE to acquire properties for schools)
Intro 729-A  requires the DOE to report on the process and data used to determine seat need, as well as to include the estimate of needed preK  seats, “if available, by community school district” and to report on disaggregated need by elementary vs middle vs high schools. (Currently the DOE refuses to report on need for elementary schools separately from middle schools, which tend the hide the need for more elementary schools , especially given the fact that they now AVERAGE about 108% of their capacity across the city.)
Intro 757-A : To form an interagency task force that would identify potential city-owned properties for schools, composed of members mostly appointed by the Mayor from city agencies, and one by the Council Speaker, who would release a report with recommendations by July 31, 2019.
Also two non-binding resolutions: Res 286 , asking the State legislature to allow NYC to use design-build for capital projects; which is more efficient than bidding out components separately; and Res 289, urging the SCA to communicate how people can submit to ideas for potential school sites.
We have also urged that the Council to pass what we believe would be a bunch of stronger, more effective bills to actually revamp the planning process to help ensure that schools are built along with new housing, and not years afterwards.
More on the status of these bills soon, but please do send a letter to the Mayor and the Chancellor today, urging them to fulfill de Blasio’s promise to fully fund the DOE-identified need for seats in the next five -year capital plan, due to be released this fall.