Schools have reopened, as overcrowded as ever, with insufficient Covid screening 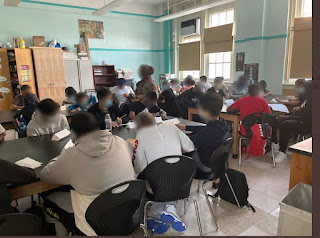 UPDATE:  On Monday, Sept. 20, the DOE announced their plans would shift again.  Now 10% of unvaccinated students whose parents give consent would be tested weekly, instead once every week.

But to minimize quarantining, NO students in the same classes as positive cases would  quarantine, as long as they were masked and maintained three feet of social distancing -- which we know does not exist in many if not most schools.  It's like the Emperor's New Clothes.  Who will call out the Mayor and the Dept. of Health on this new fantasy?

Instead, if the Mayor and the Chancellor want to minimize disruptive quarantines, they should be administering rapid Covid tests to students in the same classes as those found to be infected, as they are doing elsewhere in the country, including Maryland, Massachusetts, Quebec and elsewhere. They should also be administering weekly testing to ALL students and staff, and mandate vaccination for all students over 12, as LA schools have done.

The school year has begun and predictably there are reports of lots of Covid cases, and many  overcrowded schools and classrooms.

Already, one D75 school in East Harlem has closed because of suspected in-school Covid spread, and as many as 663 classrooms partly or totally closed.

Here are photos of two other schools: the first, to the left, shows classroom overcrowding in an unidentified Brooklyn high school, the other below, a hallway at Midwood HS in Brooklyn. 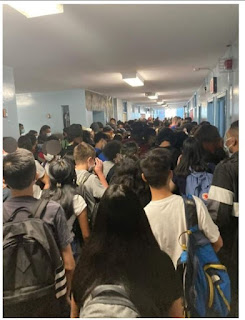 Below this post is a video taken in the hallway at Fort Hamilton HS, also in Brooklyn.  Today's NY Post has photos of similar levels overcrowding at Forest Hills High School in Queens.   According to Adam Bergstein, the UFT chapter chairman and an English teacher at Forest Hills HS:

“People are wearing masks, otherwise it’s like nothing has changed from February of 2020 until today,” Bergstein said.

All three were all on the list of the 73 "Tier one" schools  that DOE had originally admitted to principals would be impossible to provide any kind of social distancing without provided with extra space, (though they refused to reporters to confirm the veracity of the list after I posted it.).  Yet fully 727 NYC schools are more than 100% overcapacity, according to the DOE's won data.

Back in June, when principals asked DOE  what could be done in so many schools where students pack "the hallways like sardines",  officials claimed they would provide solutions, including finding more space for the most overcrowded schools:

DOE spokeswoman Katie O’Hanlon said Wednesday that “there will be enough space to safely accommodate all of our school communities in the fall.” “We have three months until the start of next school year – part of our work to get ready is actively supporting a small number of schools that may face spacing challenges so that we can accommodate all students,” O’Hanlon said.

Clearly, that didn't happen. This level of overcrowding is inhumane - even in "normal" times. During a pandemic, it is simply unacceptable -- especially given the lax Covid testing regime of only one-tenth of unvaccinated students every two weeks.

In the NY Post article, one Forest Hills parent suggested that the "school should offer a remote learning option to free up space, stagger classes or perhaps reduce the course load for juniors and seniors so they take only classes necessary for graduation."

One epidemiologist warned against letting students eat in crowded cafeterias, where they have to be unmasked; another strongly urged the city to stagger classes and test for Covid more frequently.

Today, the UFT called for more testing : "Weekly testing of students under age 12, along with those in District 75, must be reinstated if we are to meet that goal."  Presumably this means the same 20% random weekly sample as last year, and only for children under 12 and D75 students.

But as Dr. Kitaw Demissie, the dean of SUNY Downstate’s School of Public Health told the NY Post, "Every student, every week needs to be tested,” Demissie said. “Ten percent is very small.”

Received this in an email, so just read this. & why, one might ask, is 6' distancing the norm in stores but, in schools, it is 3'? Is that because children are smaller than adults?! Is it because it's more expedient? Is it so more children can be crammed into, er, accommodated in a classroom?