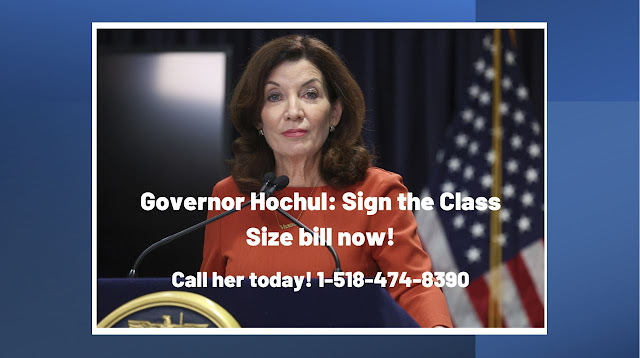 Thanks to the leaders of the Legislature, as well as Education Chairs John Liu and Mike Benedetto, along with our champions Sen. Robert Jackson and AM Jo Anne Simon, the class size bill S09460/_ A10498 passed the NY State Senate Thursday afternoon at 59-4; and the Assembly early Friday morning; 147-2.  It will require that class size be capped at no more than 20 students in grades K-3; 23 in grades 4-8 and 25 in high school, phased in over the next five years. Good articles about these long-awaited and much needed measures were published in Gothamist, Chalkbeat , Politics NY and News 4 NY and NY1; while other media outlets uncritically repeated long-debunked anti-class size myths.  Our press release with AQE and Ed Law Center is below.


Now, please urge Gov. Hochul to sign the bill, so that planning for smaller classes can begin!  Call her  at 1-518-474-8390; or message her here.  Tell her: Please sign the class size bill as soon as possible so that NYC students can receive the smaller classes that students in the rest of the state already receive.

The new law amends the 2007 Contract for Excellence (C4E) law which  required New York City  to reduce class size averages by 2012.  Yet the New York City Department of Education failed to comply and class sizes  grew larger, sometimes exponentially. The new law requires caps in all schools rather than averages and adds enforcement mechanisms to ensure City  compliance.

“If this law is enacted, it will transform New York City schools by finally ensuring smaller classes in all grades,” said Leonie Haimson, Executive Director of Class Size Matters. “For too long, city students have struggled in classes that are 15 to 30 percent larger than those in the rest of the state. These excessive class sizes have deprived them of the close feedback and support of their teachers that they need to succeed, a glaring inequity. While all students benefit from smaller classes, the research shows that those who benefit the most are children of color, who make up the majority of students in the NYC public schools.”

“This law is the culmination of persistent advocacy by  parents and teachers across New York City,” said Wendy Lecker, Senior Attorney at Education Law Center (ELC), which works to enforce  the legal rights of New York public school students. “Smaller class sizes are an essential element of a constitutional ‘sound basic education’ as defined by New York’s highest court. This legislation is vital and long overdue.”

“For years, parents, educators and advocates have fought to reduce class sizes in NYC public schools in order to ensure students get the individualized attention they need to succeed. Senator Robert Jackson stood with parents to lead the fight to fully fund Foundation Aid to ensure NYC schools would have the resources to significantly lower class sizes,” said Jasmine Gripper, Executive Director for the Alliance for Quality Education. “In 2020, AQE surveyed parents to ask their top priorities for schools and overwhelmingly parents named smaller class sizes among the top two priorities. The passage of the Class Size bill gets us closer to that goal. We urge the governor to sign it immediately.”

”Advocates and parents thank the Leaders of the State Legislature, Speaker Carl Heastie and Majority Leader Andrew Stewart Cousins along with the Chair of the Assembly Education Committee Michael Benedetto and the Chair of the New York City Senate Education Committee John Liu for shepherding this bill to passage.  We are also greatly indebted to the lead sponsors of the original bills on which these amendments are based, Senator Robert Jackson and Assembly Member Jo Anne Simon for ensuring the promise of the Campaign for Fiscal Equity lawsuit will finally be fulfilled,” Ms. Haimson said. “Now we hope and expect Governor Kathy Hochul will sign the bill, so that our children can be provided with the smaller class sizes that students in the rest of the state already receive.”