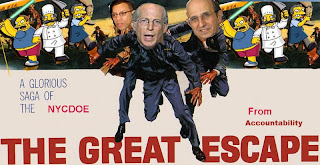 There was high drama today at the City Council hearings on the DOE's new Progress Reports. In an unusual occurrence, two members of the State Assembly appeared in person to testify against the "A-F" letter grading system. Assembly Member Mark Weprin of Queens was scathing, saying parents needed to know the system was "irrelevant nonsense". He complained the DOE's testing regime was "turning schools into Stanley Kaplan centers" and "sucking all the arts, fun and interest out of schools".

Assembly Member Jim Brennan of Brooklyn said the State Education Department should have reviewed the Progress Report grading methodology but still has not been given access to the underlying statistical methodology used to assign the grades. He pointed out how the results are often inconsistent with existing state and even city evaluations. He said "my core concern is that the system may have no validity whatsoever".

The Assembly members testified after the Council finished questioning DOE Chief Accountability Officer Jim Liebman. Parent supporters of Time Out from Testing were waiting to provide Liebman with petitions containing 6,700 signatures of parents opposed to the Progress Reports. Liebman slipped out a side door but was chased by parents lugging the boxes of signatures, followed by the press.

More details have emerged on today's events. Council Education Chair Robert Jackson asked parents to present their peition to Liebman outside the Council chambers. Instead of accepting the petition, the crafty Liebman fled through a side door normally reserved for Council use. Undeterred, parent volunteers led by Time Out From Testing director Jane Hirschmann fought a running battle with Liebman's security detail as they tried to present the petitions to him. Check out this account of the fracas at InsideSchools and video footage captured by NY1.

It's kind of ironic that the guy who blindly defends everything and anything the administration does, the guy who blatantly distorts the parent surveys, the ones they designed, to minimize class size, the no. 1 priority, is called the "accountability" officer.

Who, then, is the "avoid accountability by any and all means at our disposal" officer?