How true student progress can be measured by Debbie Meier 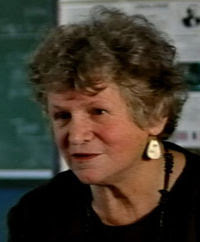 Debbie Meier, famed education reformer and founder of Central Park East, was quoted in the recent Daily News article about the current principal of CPE High School, who urged teachers to pass at least 65% of their students, whether they deserved it or not.

In the article, Debbie pointed out how the new school grading system devised by Jim Liebman encourages such practices, by giving higher grades to schools the more credits students gain each year.

Here she provides more illumination about how the original schools she founded, unconnected to CPS High School, defined student progress through projects and portfolios, and how this vision of education works against the sort of empty credit accumulation that the new grading system encourages:


Central Park East in question, and Principal Bennett, are unconnected to either the CPE elementary schools or the now defunct Central Park East Secondary School. It had a nice fifteen year history and then ended its life--on a downer.

Amusingly, the entire thrust of CPESS, based on Ted Sizer's book Horace's Compromise, is that modern high schools are about credit accumulation, not becoming well-educated, learning to use one's mind well. Thus CPESS did not count credits or courses past, and one could graduate having failed every single course.

Its "evidence" was based on putting together seven (originally 14!) portfolios of work and defending that work before a committee that consisted of faculty of CPESS, family, peers and outside experts! Over and over; demonstrating both the quality of one's work, and one's capacity to explain and defend it in a conversational setting. It sometimes also included a set on-site task as a kind of additional check on validity and on process.

It was designed to prevent the kind of cheating CPE H.S. engaged in, and which all schools and students subtly do by the very nature of the way they are organized.

For reasons best known to I don't know who, CPE High School, and something now called CPE Middle School, have insisted on using the CPE name! But they make no claim whatsoever to be following in the Coalition, Sizer, CPESS tradition. They are traditional to-the-core, and are so intentionally.

The nice thing is that a former student saw the News story and wrote me about his life. He was a special ed kid who now teaches special ed!

And he remembers us well enough to tell us all the things we'd most like to hear about what we did for and meant to him.