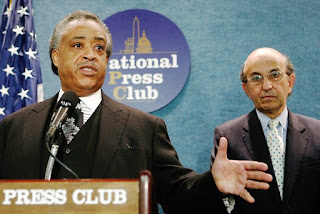 In today’s Daily News, hits it out of the ballpark again – just in time for Al Sharpton’s big pow-wow this week with Klein, Bloomberg, Arne Duncan, Michelle Rhee, Margaret Spellings, and charter school advocates from throughout the country – all singing the praises of Mayoral control and the wonders of charter schools.

When Sharpton joined up with Klein to form the “Education Equality Project” last spring, it was only ten days after he had come up with $1 million, enough to settle with the feds who were about to indict him for tax fraud.

Now it looks like at least half of these funds were provided by Plainfield Asset Management, the hedge fund of former Chancellor Harold Levy. This hedge fund is heavily invested in gambling and is lobbying the city and the state to acquire Off Track betting and the Aqueduct race track.

The funds for Sharpton were officially donated to a 501C3 organization that promotes charter schools, a “charitable” organization that allows the donors to take a hefty tax deduction, but then apparently funneled to Sharpton’s operation, which is a 501C4 lobbying group, with no tax-deductibility allowed.

At the time EEP was announced, we wrote on the blog how suspicious it was that Sharpton came up with $1 million – right after launching EPP with Klein.

….So where did he get the $1 million? As Sharpton explained to the Daily News, “"I make money, so I can pay."

Another mystery is who is funding the Education Equality Project. Until recently, David Cantor, the chief communications officer of the DOE, was listed as the main press contact on all its press releases; now they are being sent out without any names attached. Is this effort being subsidized by tax dollars that should be going towards improving our schools? Or as Cantor recently announced to our list serv, is the source of funding an “anonymous” donor, but someone other than Bloomberg? If so, who might that be?

Now, according to the Gonzalez column, Sharpton seems to be tempering his support for mayoral control, and expresses fervent opposition to “privatizing schools and corporate payoffs in education."

Speaking of payoffs, there is still the question of where the other half a million came from that allowed Sharpton to stay out of jail.

He got lucky on that one!