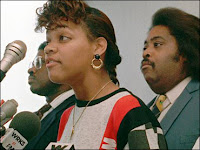 April 3, 2009 (GBN News): In a surprise announcement, Mayor Michael Bloomberg told reporters today that Joel Klein has resigned as NY City Schools Chancellor, and that Tawana Brawley has been tapped to replace him. Ms. Brawley, who has limited educational experience, is best known for a controversial 1988 incident in which she claimed to have been assaulted by six law enforcement officers.

The story was eventually exposed as a hoax, but in the meantime, three self styled advisors, including the Rev. Al Sharpton, made a series of bizarre accusations against everyone from the alleged perpetrators to the then State Attorney General Robert Abrams. Even after the story was proven false, the advisors continued to defend her, and none of them, including Mr. Sharpton, ever recanted their actions despite losing a defamation lawsuit by one of the men, an assistant District Attorney.

The Brawley appointment came as a shock to most political observers. While her lack of educational experience is clearly seen by Mr. Bloomberg as an essential prerequisite for the job, there are few other apparent reasons why the Mayor would pick Ms. Brawley as Chancellor.

However, sources close to the Mayor told GBN News that Mr. Bloomberg was impressed with Ms. Brawley’s ability to retain the complete confidence of Mr. Sharpton, despite overwhelming evidence that her story was phony. He reasoned that if she could fool someone as savvy as Mr. Sharpton for so long with such an elaborate hoax, she would be a worthy successor to a Chancellor who has done the same with politicians and pundits alike.

J. Fredrick Runson, Dean of the Manhattan University Law School and author of the best selling book, “Charlatans, Swindlers and Con Artists”, told GBN News that there is undoubtedly more to the Brawley appointment than meets the eye. “Sharpton’s a guy who can raise a million dollars from a hedge fund in a matter of days, right when he needs it to keep himself out of jail,” Dr. Runson said. “Given what’s been going on at the DOE the last few years, they’re going to need that kind of talent around. Appointing an old ally like Brawley is one sure way of keeping him on board.”

It is unclear just why Mr. Klein resigned, and a DOE spokesperson would say only that the Chancellor “wishes to spend more time testing his family”. But Dr. Runson, for one, was skeptical. “I know he loves to test people. He’s been testing the patience of parents and educators for years now. But this man has raised the educational con game to an art form. Whether he’ll be out raising money for the Educational Equality Project, or working with Harold Levy to turn Aqueduct Racetrack into a massive charter school, I guarantee we haven’t seen the last of him.”
Posted by Gary Babad at 4/03/2009 05:12:00 PM