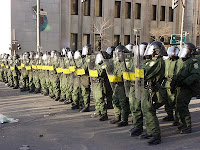 June 3, 2009 (GBN News): Alarmed at growing parent resistance to the placement of charter schools inside existing public schools, the Department of Education has reportedly begun training school safety officers to forcibly take over classroom space if necessary. According to a source at the DOE, who spoke on condition of anonymity, the safety officers are being schooled in paramilitary tactics by DOE consultants Xe Worldwide (formerly Blackwater Worldwide). They are being equipped for offensive operations, and will be relied on to seize and hold classrooms so that the charter schools can be safely put into place.

The source said that Mayor Bloomberg and Chancellor Klein were stunned at the success of parents at IS 278 in Marine Park, who successfully stopped a Hebrew Language Academy charter school from being placed within the school. They are said to be concerned that if this is repeated elsewhere, it could derail their plan to create 100,000 charter school seats by 2012. “It’s like a bunch of falling dominoes,” the Mayor reportedly said. “If we let them beat us in Brooklyn, the next thing you know, we’ll be fighting them off on the steps of City Hall.”

The Mayor plans to ask for increased Homeland Security funding to finance the operation. He is also said to be planning a new re-election campaign ad to capitalize on the new DOE tactics. The ad will employ images of 60’s protesters, while the voiceover says simply, “Mayor Bloomberg: Keeping our city safe for charter schools”.
Posted by Gary Babad at 6/03/2009 03:34:00 PM

Beware, many a true things are said in jest...

This is sick. This man needs his head examine. At a moment when the education system is in a complete shambles and he is talking about cutting education funding and he thinks it's more important to spend money on training people to be violent. Just by seeing something like this would make someone want to "act up". He is going back to the days when our people would get sprayed with the waterhose just for speaking up. What message is he really trying to send? Please oh please let this be his last term.