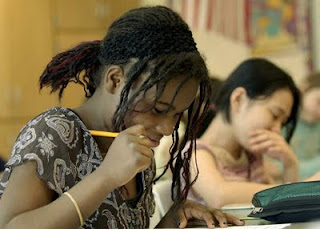 I recently examined the contracts being bid out by DOE for new “local assessments” that they intend to use to evaluate teacher performance.  Though back in May, this plan was reported in NY Times as “more than a dozen new standardized tests,” it really is far more.
Looking at the “performance based” and “computer adaptive” assessments, each to be given in at least four subjects twice a year,  a typical elementary, middle and high school student will now be asked to take at least 16 more standardized exams annually – not counting the state tests or the Regents.
Here is the RFP spreadsheet for the performance-based tests and  for the computer adaptive tests. When added together (see chart below), the total number of tests DOE is ordering appears to be a startling 408; or 136 new exams per year for  three years.
The RFP is also supposed to include online professional development for teachers, principals, school-based assessment coordinators and central staff, planning meetings and other associated expenses, printing costs, and “audit scoring” for one third of all students for the “performance based assessments.”
What it doesn’t include, of course, is the cost of wiring all classrooms and providing laptops to all students for the computer based tests, which the DOE intends to spend nearly a billion dollars on next year.
And while the NY Times article reported that DOE said these local assessments  are supposed to be aligned with the new Common Core standards, this is nowhere stated in the RFP, and it is hard to see given such a rushed job, they could be.
Moreover, in April, in testimony before the City Council, UFT president Michael Mulgrew said that he didn’t understand why the DOE was buying new tests, given that the UFT had not approved them and the city needs that approval to use them in teacher evaluations.  According to high-level sources, the UFT has still not approved the use of these assessments.
While the  NYT article said that the city wants to introduce the tests in only 100 schools next academic year, 500 schools the following year and nearly all 1,700 schools by 2013-14, the RFP asks for exams for the same number of students each year -- 390,000 per subject in 3rd- 8th grades, and 65,000 for each high school subject.
DOE officials told the NY Times that they expect these exams will require about 10 percent of the $256 million they are going to receive through the "Race to the Top" funds.
The original deadline for bids was in May, but this was recently extended to July 13. At some point, we will probably find out how much money these new exams will cost, at a time when school budgets are being brutally cut back, and class sizes are rising.
Not to mention how the administration and scoring of these tests will cost our kids the loss of even more precious learning time. All for the purpose of grading teachers by means of unreliable test scores.  And what happens when the federal money runs out?  It is likely then that city taxpayers will be expected to cover the bill.
Posted by Leonie Haimson at 7/10/2011 05:18:00 PM

This is being done in a so- called budget crisis? The children and teachers in our public schools will be doing nothing but preparing for and taking tests. Teachers,children,administrators will be judged solely on these tests.Real thinking and moral reasoning will be eliminated. Is this sick or what?
PS This is being done while class size continues to rise. HELP!!

But wait taxpayers, as the NYS ED does away with the language regents, and RCT's, the graduation requirements (for advanced regents diploma) will still require a language exam. So how will a student graduate? Somehow, the school districts across NYS will have to come up with a district version of these tests. Imagine that, NYS saves the cost of those exams and passses it onto our each and every NYS School District. What a waste of our education money with duplication of costs wasted and put on the shoulders of the taxpayers! I have called Sen. Avella, Assy Braunstein & Weprin, and Cathy Nolans office, and Robert Jacksons office to get clarity. Waiting for an answer.

I'll bet you get NWEA MAP for you computer adaptive test. Many district's are falling for their sales spiel. Our district fell for it, and it was 3 years of very expensive, time consuming, useless disaster. We ended our contract.