Say it Ain't So, Hakeem! Jeffries flip-flops on charters and school closings 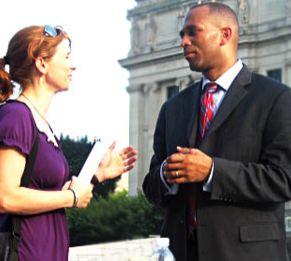 Below is a press release from Mona Davids of the NYC Parents Union.  Just a few months ago, Assemblymember Hakeem Jeffries from Brooklyn sponsored legislation in Albany that would require a one year moratorium on closing schools in NYC; he also opposed a charter co-location in his district.  Today, just hours after the Judge Feinman ruled that the school closings and co-locations could go forward, Jeffries co-authored an oped for the Daily News, along with AM Karim Camera, attacking the NAACP for suing to stop these same closings and co-locations.
What happened? As the press release notes, Jeffries has recently been put on the candidate "hot-list"  by Democrats for Education Reform, a pro-charter group run by deep-pocketed hedge-fund operators, soliciting donations for his run for Congress.  As DFER puts it, Jeffries "has the potential to be a solid education reform vote in Washington. ...but he'll need to show a strong fundraising filing in order to make that decision."
FOR IMMEDIATE RELEASE, July 22, 2011
Contact: Mona Davids, (917) 340-898
NYC Parents Union Sounds Off Against Charter School Industry's Political Influence Through Money
Hakeem Jeffries:  Another politician, another flip-flop
The New York City Parents Union is sounding the alarm against ambitious politicians seeking money from the charter school industry.  A few days ago, Public Advocate Bill de Blasio decided that co-locating charter schools with public schools was acceptable -- after standing with parents to oppose a co-location.  It is rumored that Mr. de Blasio wants to live in Gracie Mansion.
Now, a Daily News opinion piece has been co-authored by New York State Assemblymember Hakeem Jeffries regarding the co-location of charter schools and it has left the New York City Parents Union and parents in Mr. Jeffries' 57th Assembly District puzzled and very concerned.  It is rumored that Mr. Jeffries would like to go to Washington.
Mr. Jeffries' support of the charter industry's attacks on the public school parents, NAACP and the United Federation of Teachers lawsuit for challenging school closures and charter co-locations comes as a surprise, since Mr. Jeffries recently made impassioned remarks against a school closing and a co-location just this past February.
At a meeting of the Department of Education's Panel for Education Policy (PEP) on February 3, 2011, Assemblymember Jeffries opposed the closing of Middle School 571 and the co-location of a charter school within Public School 9 -- where MS 571 was already located.  Mr. Jeffries testified:   "Many of our schools remain separate and unequal".  At that time, parents and community members were impressed and grateful.
Specifically, in calling for a "time-out" for the Department of Education, Mr. Jeffries said:    "The Department of Education needs to be put on time out...They have refused to hear our voices, the school closure policy of the Department of Education is out of control.
In a March NY Daily News interview, Mr. Jeffries said:  "The Department of Education has been on a school closure binge for the last several years without any meaningful evidence that this policy benefits students."
The NYC Parents Union and local parents are wondering what has happened to Mr. Jeffries and to Mr. de Blasio.  Mr. de Blasio is clearly desperate for campaign funds in pursuit of the Mayoralty and is hoping to hook big donors in the charter school field.  It would be most unfortunate if Mr. Jeffries thinks that his road to Congress needs to be paved with gold from the charter school money players hotlist  rather than with votes from the people in his Assembly District.
The NYC Parents Union is keeping score of politicians' behaviors and positions.  All elected officials will be held accountable if they choose to abandon their previous commitment to quality public education for all children.
###
Posted by Leonie Haimson at 7/22/2011 04:04:00 PM

This is so sad.

This is a CIRCUS. These people should be ashamed of themselves.

Bloomberg, Murdoch, Broad, Gates and so many others truly know not what they do (and if they do, then they are OUTRAGEOUS LIARS on top of it all.) Their (feigned?) ignorance and arrogance is appalling and often leads to actions that border on and cross over to criminality. Is this the America we want to be? Do we really have freedom if we allow others to take it away so easily?