My "Klout" and how it went up even more, yesterday; how should I use it? 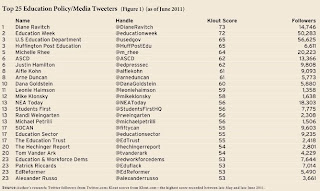 To my shock and surprise, as of late June, I was 11th on the  list of most influential education policy tweeters in the country, ahead of the NEA & Randi Weingarten, according to Mike Petrilli at the journal EducationNext. (see list to the right.)
This is measured according to something called “Klout” which analyzes “more than 35 variables on Facebook and Twitter to measure True Reach, Amplification Probability, and Network Score” (whatever that means.)
Though the list had my Klout at 59, today it is "steady" at 64; which I suppose is a result of the article.  That puts me on a par with Michelle Rhee (if her score did not go up.)  And guess what?  Michelle Rhee started following me yesterday, among several others  on the list.
Diane Ravitch is #1 of course, as she should be. Apparently Petrilli left out some other prominent tweeters with high scores, like the SOS march and Rita Solnit of Parents Across America, among others.  But still!
I only signed up for twitter in March 2010, originally to follow Diane Ravitch, and soon found that I had several people following me, so I felt compelled to tweet to them.
It soon became an addiction but obviously a useful one, since my tweeting has driven  people to the blogs, websites, and articles I think they should read, primarily those that serve as an important counterweight to the dominant education reform myth of our time, as promulgated by  #3,5,6, 8, 17, 20 and others on the list: that privatization and high stakes testing is the best way to improve our schools.
I seem to be the only real-life public school parent activist on the list; we need to get more parents tweeting to join me.  Let’s go gang!  Sign up to twitter, it’s easy at twitter.com, and then follow me at @leoniehaimson; you'll be able to check out many interesting news stories, commentary, and blogs; and you will soon find that you have followers (and "Klout") of your own.
So, readers, I ask you: how should I use my newly discovered Klout?  Influence is related to perception, so even if I landed on the list by mistake, I feel as though I should try to leverage my good fortune somehow.  Please give your suggestions, and help me to figure it out.
More about this list and how it was derived here.
Posted by Leonie Haimson at 7/07/2011 10:12:00 AM

To affect the next mayoral election. These kids need to be saved and soon. They are getting diplomas, not educations.

Leonie you are such a wonderful advocate for our children. I'm a teacher mom who follows your blog regularly. Use your Klout to expose the real conditions in our schools, and compare and contrast with charters! We need to show the broken bathrooms, gym classes in the auditorium and makeshift lunchrooms. Are there legal grounds to photograph school interiors? If yes, then send out the request and your many teacher/parent fans will take the pictures! I also agree with Anon 12:30 End mayoral control of schools in the next election.

I agree with harvey - conditions in schools are worse than ever. Nothing works. Can we please have a computer lab instead of those stupid carts. They are so difficult - you have to go get them, then hand out computers, then put them all away again. This is very difficult in between classes. Also,often they are not hooked up to a printer. Another issue is mayoral control. There needs to be some oversight - parents were supposed to be able to hold the mayor accountable but there is no mechanism for that.

There needs to be a way to expose PTA/PTO in districts across America to PAA and the important news you spread. There are a lot of parents who care about their child's school who just don't know why changes are happening. They may be inclined to blame teachers or the principal. They are involved in their child's education, but not necessarily politics and they do not know about the "reform" movement and who is behind it and how it directly affects their child's school. So what you can do with your "klout" is more education--just keep trying to reach more people particularly the parents who are already involved through local school PTA/PTO across the country. If only they knew...