Which charters are flunking according to DOE's own metrics? 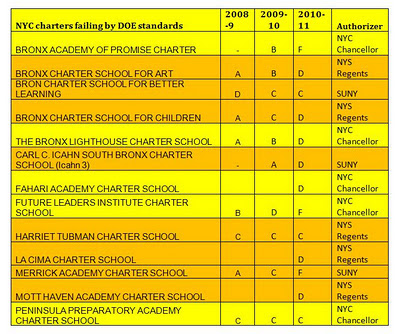 About two weeks ago, DOE officials released a list of twenty elementary and middle schools that they are considering closing.   According to the NY Times, “The schools on the list fit at least one of the following criteria: they got a D or F on their most recent progress report, or a C for a third consecutive year; they were on the state’s list of persistently low-achieving schools last year; or they received a C or D from the teams of state and city officials who were sent to review them.”

Interestingly, there is not a charter school on the list, even though according to another New York Times article , a higher percentage of charter schools got failing grades than district public schools:  13% received Ds or Fs, compared to 7% of non-charters.  Given that proportionally more charters are new and thus do not have school grades (the formula requires at least two years of data), this is not a great endorsement.
So which charters should be considered for closure, according to DOE’s metrics?  The names of thirteen charter schools that meet the progress report criteria for possible closure is above.  (I also included one charter that got one D and then two Cs, since if three Cs cause a school to be put on the list, so should these grades.)
Note the five charters in yellow; these are authorized by the NYC Chancellor, and thus could be closed down tomorrow if he wished.   There are three others authorized by SUNY, and five by the Regents.  But charters are rarely closed by means of poor academic performance, despite what their adherents might claim about their “increased accountability.”
Some caveats (as always);  the progress report grades are not to be trusted for many reasons, but particularly since they are primarily derived from one year’s test score gains or losses, which are highly erratic.  (See this post for more.) The formula itself may be incorrectly weighted.  The “D” received by the Icahn charter is especially dubious, and the Icahn director was quoted as saying that this low grade may result from the school enrolling more special needs children.  We know that in the past, schools were penalized  by having high populations of students with disabilities.
Mott Haven charter, also on the list above, serves an especially at –risk population of foster children and should not be evaluated according to the same formula as other schools. Finally, many charters have documented cases of pushing out children whom they believe will be low-performing, often have high levels of overall student attrition, and overemphasize test prep, none of which is captured in the progress reports.  Charters that refrain from such damaging policies, in comparison, should not be punished if they garner relatively low grades.
Nevertheless, if the DOE is going to consider closing  district schools on the basis of low grades, they should  do the same with charters .
In addition, we have other reasons to doubt the quality of some of the charters listed above:
Posted by Leonie Haimson at 10/13/2011 07:11:00 PM

Since SUNY and the DOE is allowing Success Charter to call any school failing based solely on their Student Performance grade, perhaps we ought to include all the Charters with D's and F's in that category as well? Probably not as don't want to legitimize the entire absurd and failed DOE grading system...

Imagine if the charter schools were required to take in the huge percentage of Special Ed,ELL and discipline problems that the public schools do. Imagine what their rate of failure would be. This is a very sad situation aimed at destroying our public schools and the UFT by our education mayor and his cronies.

The Department of Education should be ashamed of itself for so repeatedly and blatantly stacking the deck in favor of increased school privatization.

Not only does the piece raise a valid question of discriminatory treatment favoring Charter Schools, it also recognizes the critical distinctions BETWEEN "failing" Charter Schools. I'm glad to see Leonie "do subtlety". More, please!