In recent days there has been much criticism of Betsy Devos for putting out this deceptive graph on Twitter that purported to show that school spending has no impact on student achievement as measured by the NAEPs:

Here's a sample of the criticisms that she received:


Chart has some enormous flaws best refuted by research by @SchlFinance101 & @KiraboJackson Data in the hands of simpleminded education commentator is worse than ignorance itself because it will mislead others. But will fight fire with fire in my next post.
— Ed Law Blog (@DerekWBlack) April 13, 2018


Yet the sort of deceptive chart employed by DeVos has been disseminated for years by corporate reformers.  This includes corporate reform Sugar Daddy Bill Gates, who provided this chart while asserting to the Governor's Association in 2011 that  "Over the last four decades, the per-student cost of running our K-12 schools has more than doubled, while our student achievement has remained flat, and other countries have raced ahead." 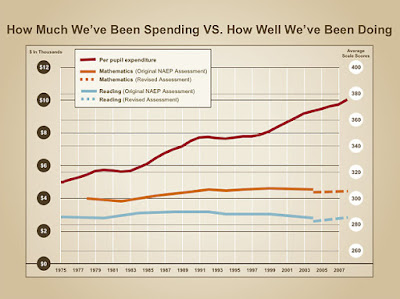 In his speech Gates implicitly endorsed the successful effort subsequently undertaken by many Governors to defund their public schools - which our education system has still not recovered from.

The chorus of boos that recently met Betsy Devos' tweet on school spending is similar to how another one of her tweets was received last month:

Does this look familiar? Students lined up in rows. A teacher in front of a blackboard. Sit down; don’t talk; eyes up front. Wait for the bell. Walk to the next class. Everything about our lives has moved beyond the industrial era. But American education largely hasn’t. #SXSWEDU pic.twitter.com/kyy2r7bTud
— Betsy DeVos (@BetsyDeVosED) March 6, 2018

Yet just a few weeks before, Laurene Powell Jobs had made essentially the same claim to the New York Times, when her Emerson Collective LLC sponsored a nationwide television program that centered around the assertion that our high schools haven't changed in 100 years:

“For the past 100 years America’s high schools have remained virtually unchanged, yet the world around us has transformed dramatically,” intones the familiar voice of Samuel L. Jackson in a video promoting the TV event."

This contrast in how misinformation is received is also reminiscent of Arne Duncan's distressing record as Education Secretary, when he proclaimed to the American Enterprise Institute in 2010 that that budget cuts to education should be enthusiastically accepted as the “new Normal”:


“My message is that this challenge can, and should be, embraced as an opportunity to make dramatic improvements. I believe enormous opportunities for improving the productivity of our education system lie ahead if we are smart, innovative, and courageous in rethinking the status quo....

In our blueprint for reauthorizing the Elementary and Secondary Education Act, we support shifting away from class-sized based reduction that is not evidence-based. It might be that districts would vary class sizes by the subject matter or the skill of the teacher, or that part-time staff could be leveraged to lower class size during critical reading blocks.

I anticipate that a number of districts may be asked next year to weigh targeted class size increases against the loss of music, arts, and after-school programming. Those tough choices are local decisions. But it important that districts maintain a diverse and rich curriculum--and that they preserve the opportunities that make school exciting, fun, and engage young people in coming to school every day.


What did he suggest as the best most “smart” and innovative way to drastically cut budgets? That states and districts should adjust by allowing “smartly targeted increases in class size.”

Then again in 2011, Duncan told journalist Dana Goldstein that “Class size has been a sacred cow and we need to take it on."  Indeed, Duncan got his wish.   Schools all over the country laid off thousands of teachers during the recession, and most haven't recovered from the onslaught to their budgets and class sizes.  According to the Center for Budget and Policy Priorities, while the number of students increased by 1.4 million since 2008, the number of public K-12 teachers and other school workers fell by 135,000.

In 2012, when Mitt Romney was running for President, he visited a Philadelphia school and proclaimed that class size doesn't matter.  His views were greeted with catcalls by many of the same Democrats who had kept their mouths shut when Arne Duncan said essentially the same thing.  Indeed, Obama ran a campaign ad, raking Romney over the coals for his erroneous views on class size, ignoring how this had become a standard line purveyed by Gates-funded DC think tanks and his own Education Secretary.

My point is simple: what's bad for the goose must also be bad for the gander.  Don't let educrats or so-called philanthropists get away with their false claims and damaging policies, no matter what party they belong to or how much funding they offer your organization. Because their rhetoric can become the "New Normal" and hurt kids and our schools for generations to come.