Yes indeed, when it comes to NYC student achievement, it's Groundhog Day over and over again 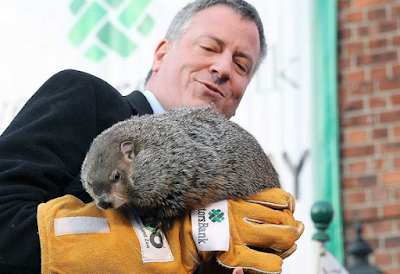 For the last two years, the State Education Department and the NYC Department of Education have claimed their favored reforms were working, based on increases in the state test scores that were imaginary.

In 2016, the tests were shorter and given untimed, and there were changes in the scoring methodology that effectively lowered the cut scores for proficiency.  Yet the test score increases led Chancellor Carmen Fariña to proclaim, "We have seen incredible improvement on these exams."   At the time, this reminded me of nothing more than the claims made by Chancellor Klein during the Bloomberg era, before that test score bubble burst, leading me to ask, "Have we entered another era of mass delusion and state test score inflation?"

So yet again, we have a Mayor using these unreliable and possibly invalid test results to "prove" that Mayoral control works and using it for his political advantage.  Again, we have a State Commissioner who says the results show that the state's educational "reforms" are leading to more learning. Again, the NYC Chancellor and a UFT president are drinking the Koolaid, to justify their preferred policies.  This time, in addition, the charter schools are also touting the results to "prove" their superiority.

I told the NY Times that I believed the increases were illusory, and in response the NYSED spokesperson said my analysis was “flawed, irresponsible and misleading.”


Last year,the city and state test scores increased again, and again, the champagne corks popped. Commissioner Elia claimed that the increase in proficiency rates since 2013 was evidence that the state's students and schools were making progress. The Mayor's press conference was even more celebratory.
Yet again, I questioned whether this was real, noting that the trends hadn't so far been matched  on the NAEPs, and added:

There are many ways to show increases in proficiency -- a metric notoriously easy to manipulate -- including making the tests easier, shorter, giving them untimed, and/or changing the scoring by lowering the raw scores to scale scores or the cut scores need for proficiency.  The state has used all these tricks over time.

Well, the 2017 NAEP scores for the city were finally released this week, and it turns out that my skepticism was well-grounded.  According to the analysis by the National Center for Education Statistics, there has been NO significant change in average scores for NYC students in any grade or subject since 2013 on these more reliable assessments - except for a significant drop in 4th grade math.

The same is sadly true for the state test scores - which haven't seen any significant increases since 2003.

As I said to the NY Daily News, "We’ve had so many years of the state and the city claiming these great improvements — but in reality there have been none. It’s an endless Groundhog Day.”

Let's hope the new Chancellor will be more forthright than Klein and Farina, and begin making taking stock and make the real changes in our schools that NYC students desperately need to improve their opportunity to learn - including smaller classes in all grades.