On Wednesday there were joint hearings at the City Council of the Education, Finance and Land Use committees on their comprehensive new report, Planning to Learn: The School Building Challenge, as well as five bills introduced to address the school overcrowding crisis which has led to more than 575,000 students crammed into overutilized schools according to the DOE's own data.  Here is the overcrowding by type of school, as included in the report -with elementary schools at 106% overutilizaiton, and the citywide average at 96%:


Deputy Chancellor Elizabeth Rose and School Construction Authority President Lorraine Grillo testified on behalf of the city.  Rose refused to admit that school overcrowding was a problem or disadvantaged students in any way, and claimed that "some of our more successful schools are overcrowded."

Rose remained obdurate on this point even in the face of repeated questioning from Council
Education Chair Mark Treyger, who pointed out that overcrowding leads to huge class sizes, loss of art and music rooms, and other evidence of a substandard education.  Using closets for intervention services  and increasing class size does have an impact on opportunities for kids, he pointed out. Moreover, educators aren’t robots and need working space too. But Rose refused to budge.

(One can only imagine the scandal that would ensue if a Department of Health Commissioner testified that hospital overcrowding, with patients receiving treatment in hallways or closets, had no effect on the quality of care provided.  Yet to my knowledge, no media outlet reported on Rose's claims.)

Lorraine Grillo admitted that the SCA has only four real estate brokers on retainer in the entire city to help them find sites for schools, and yet claimed "we’ve had enormous success with our brokers" and didn't need any more help locating sites.  Yet Council Members Vanessa Gibson and Danny Dromm pointed out how it was they who had recently identified sites for new schools in the Bronx and in Queens and had forwarded them on to the SCA. In fact,  when asked, Grillo couldn't name one school site that had been located by their brokers.

As to the SCA's enrollment projections, Grillo repeatedly claimed that they were accurate within 1-2 percent citywide.  However, that claim cannot be verified since neither the DOE nor the SCA release these projections publicly, and even if true, it could still mean that from district to district, neighborhood to neighborhood the projections were completely off.  Finally, given how many schools are at or near 100% capacity, the difference of only a few students could bring many of them above the tipping point. 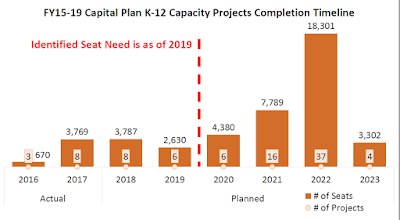 Dromm also pointed out that the majority of seats funded in current five year capital plan won’t be ready till after 2022- wouldn't it be better to do rolling ten year plan instead? By 2022, it is likely that school construction will have fallen even further behind the need.  Grillo said that "we're mandated only to do a five year plan", implying that they couldn't go beyond that.

Will you include preK seats in future seats projections? Dromm asked.  The SCA doesn't apparently include preK in its seats need projections, even though many thousands more preK students are now in our schools, contributing to even worse overcrowding. Grillo said no,  those figures come from a separate department at DOE.  (what?)

Dromm: There's a huge development planned for Willis Point with 5000 housing units; but only one elementary school planned for the area.  Why not include a middle and a high school in the project?  Grillo responded: Queens high schools are already  overcrowded (This of course doesn't explain why they won't site on there.) What about a middle school, asked Dromm? Grillo said she didn't know.

The reality is that the school planning process uses a formula that is based on census figures twenty year old, and doesn't take into account either the increased numbers of preK students or charter school students in DOE buildings.

The planning process also requires very high thresholds of increased overcrowding to be predicted by this inadequate formula to consider building a new school, even in neighborhoods where the schools are already overcapacity.  (One of the bills we proposed in our testimony is that the City Planning be required to update the formula based upon the latest Census figures, to include preK students, and to eliminate all thresholds so that the city builds schools where the schools are already overcrowded or likely to become so when the project is built.)
CM Rafael Salamanca, head of the Land Use Committee, also asked a series of good questions:  Why does the SCA use housing data in its seat needs analyses that includes so few units  built between 2019-2024, despite the current construction boom?  Grillo didn't know what he meant.
See this chart, with data drawn directly from the current SCA website - which reveals that for the purpose of projecting enrollment, the city predicts that not a single housing unit will be built in the entire borough of Brooklyn between 2019-2024, and only 184 units in the Bronx -- both experiencing huge building booms:

Salamanca then asked, Why is there only one multiplier used per borough to project the need for schools, given how the birth rate and immigration differs widely from one neighborhood to the next?   Grillo responded, this is only one piece of puzzle.

Salamanca also questioned why there was no effort made by the City Planning to address these issues: City Planning comes to us and says, we want 4000 new units in my district, but they have NEVER mentioned the need to build any new schools for the new families living there.  Why?  In many districts school overcrowding has existed for decades; and as we expand preK and 3K, and available land gets scarce and the population grows, the challenges increase to provide enough schools.   We must revise our methodologies to ensure all students have the maximum chance of success.

But perhaps the biggest revelation came when Council Member Treyger asked representatives from City Planning and DCAS (Department of Citywide Administrative Services) to join the DOE and the SCA at the witness table.

He then questioned them if they regularly communicate with the DOE about the need for new schools.  While they didn't answer the question directly, it soon became clear that there was no ongoing collaboration between these city agencies on the issue of school overcrowding, and that they are only involved when it came to major rezonings (City Planning) or when identifying available city-owned or other buildings for expanded preK and 3K (DCAS).

After the questioning of government officials was over, I testified, followed by disability advocates who spoke on the need to retrofit schools for better access.  Then CM Treyger asked if we felt that there was any real coordination between city agencies on tackling school overcrowding.

I answered that there was no effective collaboration that I could see, and that city agencies responded
only to the Mayor's top priorities, which up to now have been expanding preK, implementing 3K and building more housing, all of which actually contribute to worse school overcrowding rather than counteract it. Meanwhile, the only schools that are built are those where there is a tremendous grassroots effort undertaken from parents and their elected officials to demand this.

An example of what it requires occurred in the hugely overcrowded community of Sunset Park last year.  There have been five additional schools for Sunset Park funded in the capital plan for over 20 years without a single one built or even sited, with the DOE claiming there was simply no room in the neighborhood for new schools.  Then last year, four sites were acquired by the SCA for schools but only as a result of a tremendous organizing effort of parents, community organizations, and CM Menchaca, who identified these sites and pressed for their acquisition.

Not every community can do this, of course, and with the capital plan for school construction only half funded, many children will be left out.  Without the active involvement of the Mayor to prioritize this issue, and without a substantial boost in spending in the capital plan, along with systemic reforms to the process of school planning and siting, the problem of school overcrowding will likely grow even more severe, and NYC children will suffer the consequences.

Our testimony is posted below and here; and includes suggestions for strengthening the five bills already introduced.  It also proposes four additional bills: