The Daily News reported on our lawsuit , as did Queens Chronicle, WNYC radio, and Our Time Press.


On Thursday April 12, 2018, Class Size Matters, the Alliance for Quality Education and nine parents from all five New York City boroughs filed a lawsuit against the NYC Chancellor Carranza, the Department of Education, and NY Education Commissioner Elia in the State Supreme Court in Albany, to demand that class sizes be reduced in NYC public schools.  The plaintiffs were represented in court by Wendy Lecker of the Education Law Center.

The Contract for Excellence Law was passed in 2007, requiring that the NYC Department of Education lower class size in all grades over five years. Instead, class sizes have risen substantially since then. In July 2017, these same plaintiffs appealed to the NY State Education Commissioner, to demand she enforce the C4E law and require the NYC Department of Education reduce class sizes in all grades. The Commissioner dismissed the petition in December 2017, wrongly claiming that the city’s obligation to reduce class size had “expired” even though the class size provision remains in the law. Now advocates and parents have challenged that decision in court.

Said Leonie Haimson, Executive Director of Class Size Matters, “It is unconscionable that the state 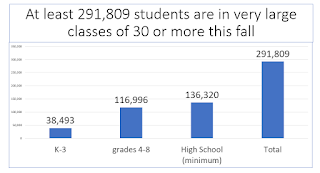 and the city have flouted the law and are subjecting over 290,000 students to overcrowded classes of 30 students or more. It is time for the new Chancellor to finally do the right thing and provide our children with a better opportunity to learn. Class size reduction is one of only handful of reforms have been proven to work to boost student learning and narrow the achievement gap. The fact that NYC test scores have stalled over the last four years, according to the most reliable national assessments, shows that our students desperately need smaller classes.” 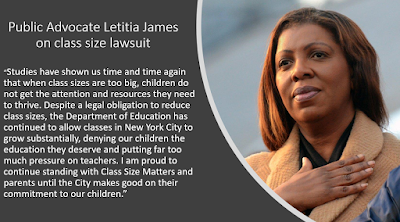 “Studies have shown us time and time again that when class sizes are too big, children do not get the
attention and resources they need to thrive,” said Public Advocate Letitia James. “Despite a legal obligation to reduce class sizes, the Department of Education has continued to allow classes in New York City to grow substantially, denying our children the education they deserve and putting far too much pressure on teachers. I am proud to continue standing with Class Size Matters and parents until the City makes good on their commitment to our children.”

JoAnn Schneider, a Queens parent and plaintiff, agreed: “The other day I encouraged my son to raise his hand during 5th grade math. He had just received a "0" for participation. In a class of 32 kids, his chance to participate and his chance to learn has been squashed. He needs a smaller class size now.” 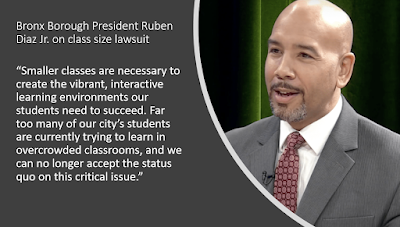 “Smaller classes are necessary to create the vibrant, interactive learning environments our students need to succeed. Far too many of our city’s students are currently trying to learn in overcrowded classrooms, and we can no longer accept the status quo on this critical issue,” said Bronx Borough President Ruben Diaz Jr.

“My daughter has been in huge classes since Kindergarten,” said Naila Rosario, another plaintiff whose children attend public schools in Brooklyn. “This year, in fifth grade, her class size is 34. Like other children, she needs and deserves more personal attention and feedback to thrive. Despite the Mayor's claims, there can be neither equity nor excellence when NYC children are disadvantaged in this way."

In a newly-released report entitled Planning to Learn, the New York City Council acknowledged that “NYC has still not met the agreed-upon class size reduction goals established in 2007.” 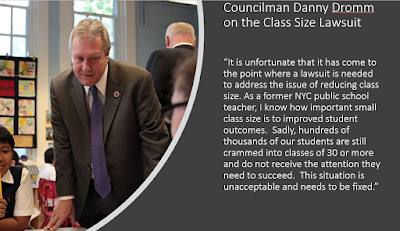 "It is unfortunate that it has come to the point where a lawsuit is needed to address the issue of reducing class size," said NYC Council Finance Chair Daniel Dromm (D-Jackson Heights, NY). "As a former NYC public school teacher, I know how important small class size is to improved student outcomes. Sadly, hundreds of thousands of our students are still crammed into classes of 30 or more and do not receive the attention they need to succeed. This situation is unacceptable and needs to be fixed immediately."

Advocates and parents are asking the court to overturn the Commissioner’s decision and order New York City to fulfill its obligations under the law to lower class size, so that the city’s children have an opportunity to obtain the sound basic education to which they are entitled under the state constitution. The state’s highest court in the Campaign for Fiscal Equity case said could not occur in NYC schools without smaller classes.

The complaint is posted here.