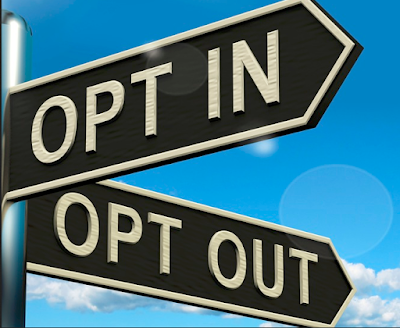 For the past three years, the statewide opt out rate has ranged from 19-21%. More than 90% of NY districts failed to make the 95% participation rate last year that the feds supposedly require.  No NY school or child has suffered because of opting out in the past, and this remains the case this year.

Schools will not be ranked lower in the state's accountability system for a high opt out rate or lose funding as a result, and children refusing to take the test will have not have low scores entered into their records.  LoHud News reports that the most serious penalty for schools with high opt out rates will be paperwork: "Schools that "persistently and substantially fail" to hit the 95-percent participation target will have to do a self-assessment of their failings and develop a plan to do better."  Newsday quotes the State Education Department spokesperson this way: “It’s up to parents to decide if their children should take the tests, and we want them to have all the facts so they can make an informed decision.”

So what are the facts?  The state exams have been shortened from three days to two, which is an improvement, and the state mandated that no child could be held back because of a low score on the exam, and no teacher judged on the results, as occurred during Mayor Bloomberg's administration.

But there are still many questions about the quality and usefulness of these exams. Here a third grade teacher points out how many of the reading passages continue to be far above grade level, and how the results fail to provide any useful diagnostic information to teachers about their students.  Many other educators have pointed out how the state exams are replete with questions like "What is the main idea" of a reading passage, while offering multiple choice answers that are confusing and ambiguous.

As Jeanette Deutermann of Long Island Opt Out points out, the overemphasis on high-stakes testing has caused schools to narrow the curriculum, focus on low-quality worksheets and eliminate project-based learning.  The exams also widen inequities and are toxic for students, as Johanna Garcia explains.  Chancellor Farina privately told a group of NYC parents two years ago that she herself would opt out of the test if she had an English Language Learner or special needs child -- though she  refused to admit this publicly.

The Common Core standards and exams have also promoted other damaging practices in schools, such as "close reading" strategies in which teachers aren't supposed to explain the larger context of passages, with students deprived of the background knowledge they need to fully comprehend assigned texts.  For the best and most concise critique of how this impairs learning, see a one minute video from Nick Tampio, professor at Fordham University.
Indeed, some Common Core proponents are now backtracking and renouncing the value of the current state exams, including Louisiana State Superintendent John White, (formerly Deputy Chancellor of NYC DOE) who now says that reading tests should be based instead on knowledge and a broad curriculum:

The trouble is that by not requiring knowledge of any specific book or facts, reading tests have contributed to the false impression that reading is mainly about having skills such as being able to summarize, and not about background knowledge. Walk into many English classrooms today and you will see students capably identifying an article’s main idea. But you’re less likely to find students learning the historical context for a novel or discussing the novel’s broader meaning. By not requiring knowledge, tests create no incentive for particular knowledge to be taught.

This is not fair to adolescents, who need knowledge to become effective adult readers. It’s particularly not fair to students from historically disadvantaged backgrounds, whose summer breaks rarely involve trips abroad or afternoons at museums, and who are thus at a disadvantage on any test that, whether it’s acknowledged or not, measures background knowledge. And it’s not good policy for a nation struggling with the influence of falsified news reports over its citizenry.

White has been congratulated for taking this position by many who formerly supported the Common Core, like Robert Pondiscio of the Fordham Institute and Larry Berger of Amplify, without acknowledging how this new stance is totally contrary to the current regime, which emphasizes "skills" in dissecting "texts" over content and background knowledge.

Walter Isaacson, head of the Aspen Institute, which has received millions from the Gates Foundation for promoting the Common Core as well as other damaging experiments, congratulated John White this week in a speech before the Public Affairs Research Council, for being "incredibly experimental” and "willing to try new things but admit when something isn’t working and course correct", according to an attendee.

Incredibly experimental is not a great compliment @walterisaacson if you have a child in the Louisiana public schools cc @deutsch29blog https://t.co/UQ7PQeMOHg
— leonie haimson (@leoniehaimson) April 8, 2018

What right did @billgates and their facilitators and grantees like @aspeninstitute have to experiment on the entire nation’s public schoolchildren all at once by imposing flawed #commoncore standards and exams-@WalterIsaacson @LouisianaSupe @larryamplify @gatesed https://t.co/rpm8bCY9r0
— leonie haimson (@leoniehaimson) April 8, 2018

Until you guys admit your complicity & arrogance in imposing your flawed vision w/o consultation & consent of those affected your second thoughts deserve no credit https://t.co/u2QRASF1i9
— leonie haimson (@leoniehaimson) April 8, 2018

Unless it can be shown that the New York state exams are high-quality, yield reliable and useful results, and encourage rather than discourage good teaching and real learning in our schools, parents not only have the right to opt out their children of these exams, they have good reasons to do so.

As Chris Cerrone, a teacher and co-founder of Western New Yorkers for Public Education, writes:

The opt-out movement is not just about refusing to take a test, but, instead, offering a vision for public education that rejects a focus on assessment skills, workbooks and teacher-centered classrooms. Families who boycott yearly standardized tests instead advocate for student-centered learning and creative activities that include hands-on and real-world simulations. Imagine every classroom and school system engaging students, to promote imaginative, higher-order thinking that goes well beyond the narrow scope of a test-focused education system. These are the skills our children need to truly be ready and flexible to meet a rapidly changing world as they graduate.

Sample parent opt out letters are offered by NYS Allies for Public Education  and NYC Opt Out.
Posted by Leonie Haimson at 4/08/2018 05:35:00 PM