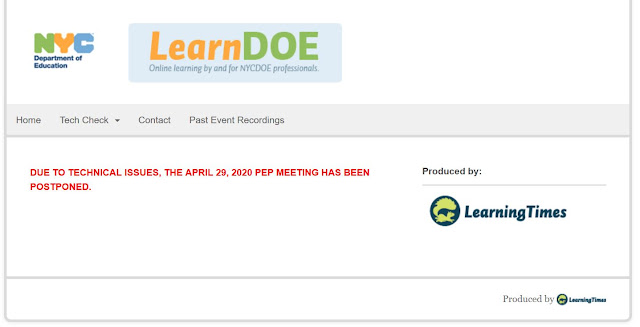 As the Daily News reported this morning,  because of the inability or unwillingness of DOE to put the busing contract extensions for March and April up to a vote of the Panel for Educational Policy last night, all 16,000 bus drivers have now been furloughed.  The meeting, which had already been postponed from last week , ended shortly after it began because of problems with the DOE online platform. More on this below.

Yesterday was a crazy day, even crazier than usual during these crazy times, due to technology gone astray. In the morning,  I was using a new app to broadcast my "Talk out of School" WBAI weekly radio show from home, connected via my iPhone to the sound engineer Michael Haskins, who is broadcasting the show from his home during the pandemic.

There were some unexpected gaps on the air before the show started and for a few minutes into the beginning of the show. Nevertheless, when the show did begin, my guests were great, including advocate Matt Gonzales, co-author of this letter about what a fully empathetic grading system should be like, and his explanation and critique of the DOE system that will be used.  Then I spoke to parent leader Naomi Pena about the myriad challenges families are facing during these difficult times with remote learning.

Luckily, my assistant Peter managed to edit the sound file to eliminate the gap at the beginning and to upload it to Simplecast; you can listen to the show here.

Then I drafted some brief comments to make at the Panel for Educational Policy meeting that was due to start that evening at 6 PM, to be conducted online via an platform called Adobe connect.  The PEP meeting had already been postponed from the week before, presumably because of the controversy over the cost of the busing contracts  -- a huge unnecessary expense especially at this time of fiscal crisis, as no buses have operated since schools were shut down in mid-March.

I was going to call on the Panel members to vote against renewing these contracts, which were to be retroactively approved for the month of March at $200 million, and another $200 million for April.  If these contracts were cancelled through the end of the year, that could save the DOE as much as $700 million.  I also urged them to consider voting against some of the other unnecessary contracts on the agenda as well:

Wasting funds that should go to educating children should never happen, but especially at a time like this, when the city is facing a fiscal cliff and the Mayor has proposed $827 million in cuts to education, with at least $240 million directly to school budgets next year.


I strongly urge you to consider cancelling the bus contracts which amount to $700 million in unnecessary expenses since schools are closed and they are not being used.  As the NYC Comptroller pointed out, there is a clause in these contracts called Force Majeure, which means that either party can pull out without consequences if extraordinary events occur such as epidemics.


If this was done, it would prevent the need for most all the cuts that have been proposed for next year.


In addition, you should scrutinize carefully before you approve the contracts for professional development that’s not happening this year, the nurses we will need next year but not this one, and the consultant contracts which honestly seem like frills we cannot afford.


If you do give a blank check to DOE, I hope you realize that you are making it more likely that next year, children will face even larger classes and the loss of counselors, social workers and other essential services that they will need more than ever before.

Then at about 3:30 PM, I got a call from a Panel member who told me they had just received an email from DOE,  saying the vote on the busing contracts would be further postponed, and that the they were still in "conversations" with the bus companies.  This was subsequently confirmed by another Panel member.
I still intended to listen to the meeting and speak out against these and other unnecessary contracts, and logged into the Adobe Connect portal at 5:30 PM, where I had to fill out an online form with   my name, affiliation, email, and whether I request to speak, and if so, on what agenda item.
I was pushed off the platform several times, kept logging in, switched browsers to Chrome, then tried to log-in via my iPad.  Once I gained entrance to the meeting, there was a note online that if someone wanted to provide a comment they should download the "audio setup wizard" which was nowhere to be seen.
The sound was inconsistent and scratchy, and as more and more people joined the meeting, problems multiplied exponentially.  DOE officials and panel members were speaking over each other or couldn't be heard at all.
Each time I got pushed out of the meeting, I had to log in again with all my information - name, email, affiliation etc. [Should disclosing all this private information be required to observe an Open Meeting for a governmental body?] Every time I had to log in, it would take longer each time. 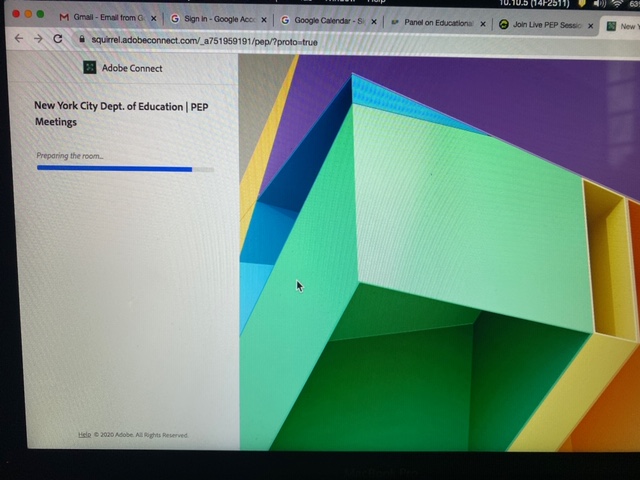 Meanwhile,  comments were flying back and forth on Twitter for those of us hoping to listen and to speak on the various controversial issues to be considered, including the contracts, the huge proposed budget cuts to schools, the newly announced DOE grading system, and more.   Here are some:


Does it sound like the @NYCSchools pep meeting is being held underwater for anyone else? This is a bigger technical struggle than my previous 6 weeks of virtual schooling.
— Samantha Rubin (@StealthisSN) April 29, 2020


I've been remote teaching for 6 weeks and so far nothing this embarrassing has happened
— Samantha Rubin (@StealthisSN) April 29, 2020


Everyone suddenly went absent and reappeared, right after @DOEChancellor spoke. He made one of these 😬 and was like, "Did I do that?"
— Reema Amin (@reemadamin) April 29, 2020

You think this qualifies as a legal meeting? Now I think they’re excusing themselves that there are 450 people signing on #PEPfiasco
— leonie haimson (@leoniehaimson) April 29, 2020


I've been on since 5:30pm. Since the meeting "started" I haven't been able to make out one complete sentence. This cannot be considered a legal meeting.
— Alexa Avilés for City Council 2021 (@alexaforcouncil) April 29, 2020


Howard Friedman general counsel says to move the meeting to next week to work out the “issues”
— leonie haimson (@leoniehaimson) April 29, 2020


That @AdobeConnect platform is HORRENDOUS. You can’t hear anyone, it’s super low or volume cuts in and out. The static feedback is like scratching nails on a blackboard. The video quality is like a computer system running DOS. When @zoom_us was used last month, it was seamless.
— Naomi Peña (@naomi325) April 29, 2020


We were ALL planning to be there and speak out against unnecessary private contracts! Totally irresponsible for NYC govt to operate this way, esp given that dozens of virtual meetings go on at CEC’s, CB’s and other orgs every day!
— kimwatkinsnyc (@kimwatkinsnyc) April 29, 2020


Tonight’s PEP Meeting debacle is symbolic of what we've been saying about access Remote Learning in our community all along. Don't assess and grade our children under these conditions! #PEPNeedsImprovement pic.twitter.com/3pq7hICfuU
— Tom Sheppard (@tomcsheppard) April 29, 2020


I subsequently heard via a reputable source that the DOE had moved off from Zoom to Adobe Connect for their PEP meetings, and had told people that the new platform was more reliable and "white glove," and thus also pricier.  How much they are paying for this deficient program is unknown.  Perhaps an enterprising reporter can find out!

I have many other, far more important questions which still need to be answered:

1- Are the busing contracts still under discussion, or has the DOE now decided not to extend them through the end of the year?

2- If the decision has been made to cancel these contracts, how many millions will be saved?  Is the total amount  $700 million, which is what the savings should be, given that the contracts cost $200 million per month and all busing ceased in mid-March?  Or since the contract to be voted upon last night was retroactive for March and April, does that mean the DOE already pay out $400 million -- even though the emergency extension had not yet been approved by the PEP?  (The NYC Comptroller has been very vocal in opposition to all these retroactive contracts; with 93.6% of DOE contracts submitted retroactively last year - the worst of any agency. Clearly this is not what the State Legislature envisioned when they gave the PEP to authority to approve or disapprove DOE contracts.)

3- Since none of the savings from cancelling the busing contracts were reflected in the Mayor's Executive Budget released two weeks ago, if the decision to cancel them is final, does this mean that the DOE's proposed budget cuts of about $240 million directly to schools can now be reversed?

4-If there is money left over, will the Mayor and Chancellor consider spending additional funds on reducing class size from these savings, as the UFT President Michael Mulgrew and others have pointed out will be necessary to maintain social distancing in classrooms next year, as well as provide the academic support necessary to make up for all the learning lost during the shutdown of schools?

I hope we get some of the answers to these questions soon.  Families and city taxpayers deserve to know.