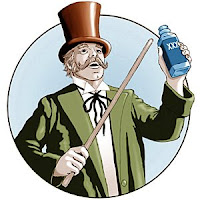 July 28, 2008 (GBN News): Bloomberg LP, the company owned by NY City Mayor Michael Bloomberg, announced today that it has agreed to acquire the country’s largest snake oil company, Python Snake Oil. The actual takeover will not be in effect until January 1, 2010, when Mayor Bloomberg will leave office and resume full time control of his company. At that time, Joel Klein, whose tenure as Schools Chancellor will almost certainly end with the Mayor’s, will take over as CEO of what will be known as the Snake Oil Division of Bloomberg LP.

In a statement to the press, a company spokesperson touted the acquisition as “a marriage made in heaven” between the world’s premier snake oil company and the world’s best snake oil salesmen, Mayor Bloomberg and Chancellor Klein. After the announcement, Python Snake Oil stock doubled in value within hours. Noted financial analyst J. Fredrick Muggs, Dean of Manhattan University School of Business, told GBN News that despite the current bear market, “Investors obviously believe that if the Mayor and Chancellor can sell a bunch of flat test scores as significant progress, they can sell anything, even snake oil, in massive quantities.”

Sources at Bloomberg LP told GBN News that speculation within the company is that the profits from the new snake oil division will be used to fund the development of a number of charter schools in New York City. There was no direct comment on this from either Mr. Bloomberg or Mr.Klein, though a source at the DOE told GBN News that the Chancellor was sporting a “particularly venomous look” today.
Posted by Gary Babad at 7/28/2008 02:54:00 PM