Joel Klein tries to shake down the heavy hitters at Sun Valley... and provides an excuse for ridiculously expensive day care 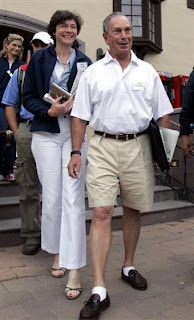 Joel Klein is continuing his mission for world domination by hobnobbing with the media and hi tech elite at the annual summer confab hosted by Allen and Co. (Unfortunately, I couldn't find any photos of Klein at Sun Valley, but here is one from two years ago of Bloomberg whose appearance at the event earned him a position on the NY Daily News worst-dressed list.)

We posted earlier about the fact that Klein had made a presentation on his new vision of education reform, along with the other favorite of the business establishment, “Take No Prisoners” DC Chancellor Michelle Rhee. The response of one corporate insider, according to Media Bistro:

“Sony Corp.'s Katsumi Ihara called the presentation "fascinating" and said it broke down some of the causes and problems in the education battle in the and should yield interest from CEOs around the country. He added that Klein wasn't simply asking for money. He wanted their help in initiatives and projects to stimulate educational programs.”

Get that? “Not simply asking for money.” Presumably, Klein is not asking for money to improve the NYC public schools, which are still hugely overcrowded and burdened with the highest class sizes in the state, nor the “Fund for Public Schools,” a non-profit organization established to provide services and resources to our public schools, but now spending millions to run ads about the great job he and Bloomberg are doing.

I would guess – and this is pure speculation – that Klein is probably asking them to subsidize his new alliance with Al Sharpton, the so-called “Education Equity Project”, announced with great fanfare at a press conference in last month, which the Washington Post called “the kind of odd coupling that seemed more like the premise for a reality show than a news conference on education policy.” At the press conference, Klein and Sharpton announced that they would stage events at both political conventions this summer, to influence the agenda of the future President, as well as undertake other unspecified activities.

Whether or not Klein will raise major bucks at from Sony and the like to fund this operation is hard to predict; perhaps he has learned some tricks from Sharpton, well known for his success in “shaking down” corporations to fund his own operations.

Yet the need for more funding is clear, as the Klein-Sharpton alliance still seems to be primarily financed through our NYC taxpayer money, in the midst of a major budget squeeze that has made major cuts in social services for the elderly, housing, jobs for youth etc. In fact, ’s very busy chief press officer David Cantor the main media contact on all its press releases, while also tasked with monitoring and responding to blogs and list servs like ours.

Not to mention Cantor’s primary responsibility of managing a large press operation that has to try to make it look like Klein and Co. actually know what they’re doing.

Apparently, Klein’s presentation did make an impact, at least with Sergey Brin, the head of Google, who sat down with reporters at to attempt damage control on their decision to cut subsidies and sharply raise the cost of child care for their employees – a blunder which made the front page of the NY Times recently. The full Times article is well worth reading, but here is a summary from InfoWeek:

… Google already had reasonably priced day care, when it decided to open a vastly more costly Euro-style operation, called the Woods, which uses something called the Reggio Emilia philosophy. Then Google also decided to upgrade the first, cheaper day care to mimic the Woods. Corporate push has come to shove because the more expensive approach is the pet project of Google VP Susan Wojcicki, who also happens to be Sergey Brin's sister-in-law.

The result? Google raised the price of day care to their employees by 70%, meaning that it will now cost parents with two children $57,000 per year.

How did Brin rationalize this? By referring to Joel Klein’s earlier presentation on the need for quality teaching. Apparently, the supposedly poor teaching in our public schools is now a blanket excuse that now can cover any management failure, from spending millions a year to keep more than a thousand teachers sitting in idle in ATR and/or rubber rooms, failing to address the ongoing crisis in class size, or the fact that the achievement gap still remains.

Perhaps Klein should advise Google to deal with this PR disaster by hiring Robert Gordon and renaming their efforts “fair student funding.”

Hi,
As an Australian high school teacher I read with interest and concern your blog due to the fact that our deputy prime minister is currently over in the states meeting with Joel Klein. Could you possibly point me in the direction of some other sites of information on his policies?
Thanks
Sebastien