Joel Klein devises a plan in which he can stay in power....forever! 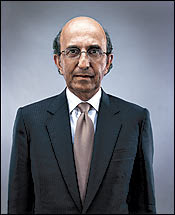 Last week, the DOE announced, with a straight face that, after competitive bidding, it had awarded a five year, $50 million contract to train principals to the (drum roll please) NYC Leadership Academy.

Ten million dollars a year of taxpayer money that will continue for five years, long after Bloomberg has left office. This news, delivered with a straight face, went mostly unreported in the press, with a few exceptions.

The press has had a field day reporting much smaller City Council grants to organizations that employ relatives of City Council members. But when Joel Klein awards a $50 million to an organization that he himself heads, nothing but….silence. The bare faced absurdity of it all cannot be outdone.

Encouraged by the lack of critical reception, Klein and his overpaid deputies have devised a new plan by which they can remain in power indefinitely, even after the Mayor leaves office, even if Mayoral control is significantly amended.

How? Simple. Before leaving office, Joel Klein will grant himself a contract to run the schools for the next twenty years, running the entire operation from an outside corporation, and eliminate DOE altogether. Whether this device is legal or not is uncertain, but that has never stopped him before.

At the same time, by eliminating the need for the entire central office at , he can claim a great victory by having shrunk the bureaucracy.

A savvy reporter informed me that Joel Klein took himself and Chris Cerf off the board at the about a month ago – just before awarding them the $50 Million competitively bid contract. Not that this would fool anyone, but…

Sure enough, when you go to the Academy's website here , you see the original board listed; but the links are missing for the bios for Klein, Cerf and Robert F. Arning, who is head of the NYC office of KPMG and has a huge contract with DOE as well.

And when you go to another page listing the board, their names are omitted.

Wonder if any of this is legal….since Klein stepped off the board right before granting the contract, presumably he thought there might be a problem.

UPDATE (July 27); the DOE's Truth Squad at work has made sure that the first of these links has been removed, eliminating any trace of Joel Klein's previous leadership of the Board, as well as Cerf's participation. When you go to the second link, there are eight current members listed, including Kathy Wylde of the NYC Partnership and two emeritus directors of McKinsey and Co. Two of the Leadership Academy's board members received awards from the Partnership in 2007, and another serves on their board as well.