Education in China: Far from Nirvana, but Not So Far from NCLB 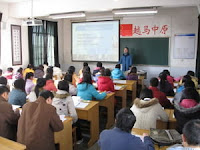 Andrew Wolf’s July 11 column in the New York Sun referenced my June 28 posting on this blog concerning the complexity of the math problems China’s education system expected its fifth and sixth graders to be capable of solving. While the example problems he cited were accurate (and real), readers of his column might well infer that we endorse China’s educational approach. I cannot speak for Mr. Wolf, but I can state that, having seen it at relatively close hand for several years in the rapidly industrializing and modernizing eastern coastal city of Suzhou (about fifty miles west of Shanghai), I categorically do not. Here in highly summarized and generalized form are some of the characteristics of Suzhou’s school system:

-- Public school principals run their schools like small businesses, collecting tuition, leasing real estate on their grounds, and operating conference centers and even small factories on their campuses for extra income.

-- Teachers are permitted to act as paid tutors for their own students, an incentive if ever there was one not to be overly effective in the classroom. Teachers also receive sizable annual bonuses from their principals depending on the school's success in the citywide, province-wide, and/or national exams.

-- Students remain in one classroom all day, even in high school. The school day begins at 8:00 am and usually runs to 5:00 or 5:30 pm, with a 60 – 90 minute lunch break. Non-academic school activities such as clubs are minimal, and organized interscholastic sports teams are limited to perhaps boys soccer, boys basketball, and boys track.

-- Typical class sizes are 48 – 50 per class, with almost universal tracking (grouping students by “ability”) by the start of middle school.

-- All middle schools and high schools citywide are ranked from highest to lowest academically. Admissions to both middle school and high school are dictated by students’ scores on a single citywide entrance exam. Thus, a child’s academic future (including college) is fairly well determined on the basis of a single exam he or she takes at the end of sixth grade.

-- Nearly every class period consists of teacher lectures, often nothing more than reading directly from the textbook. Students are strongly discouraged from asking questions and generally only speak when called upon to read or reply to a direct question. The spirit of intellectually curiosity or exploration is non-existent.

-- Much of students’ sixth, ninth, and twelfth grade years is spent preparing for the round of exams that will determine their access to middle school, high school, or college. College exams are nationwide, lasting three days and covering eight different subject areas, including English language. Those exams are virtually the sole factor in deciding which students will qualify for which universities across the nation. They are so dreaded that students used to refer to them by the nickname “he qiyue” – black July - until the exams were moved to June (perhaps now "he liuyue" - black June?).

The list could go on quite a bit longer, but the outlines should be clear enough: large scale performance tracking of schools and students based on high stakes standardized exams with reward systems to match, curricula and teaching focused almost exclusively around preparation for those exams through rote learning and repetition, discouragement of intellectual inquiry and suppression of anything that might suggest a student’s scholarly passion, and systemic disinterest and disregard for non-academic activities and students’ social development.

China’s is an educational system that specializes in book knowledge at the expense of critical and creative thinking, as well as conformity, pressure, and self-discipline at the expense of individuality, self-motivated inquiry, and free-spirited thinking outside the box. Far from being a model to emulate, it is in many ways an intellectually stultifying system that reflects the Bush/NCLB/Bloomberg-Klein philosophy taken to its logical if extreme conclusion.
Posted by Steve Koss at 7/18/2008 03:26:00 PM