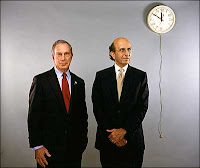 July 12, 2008 (GBN News): Secret papers obtained by GBN News reveal a plan, masterminded by Schools Chancellor Joel Klein, to put Mayor Michael Bloomberg in the White House notwithstanding the Mayor’s declared intent not to run. The plan entails a massive last minute stealth write-in campaign, financed by the Fund for Public Schools, which is chaired by Mr. Klein.

Furthermore, the papers portray a far different relationship between the Mayor and Chancellor than publicly revealed; in fact, they show the Chancellor as the Mayor’s “Dick Cheney”, running the government from behind the scenes. Moreover, the plan reportedly goes beyond simply getting the Mayor elected, and lays out plans for government “reforms” that could amount to the functional equivalent of a “coup d’etat”.

Once Mr. Bloomberg is inaugurated, Mr. Klein plans to move quickly to secure a no-bid contract for the NYC Leadership Academy to install its graduates into all key civilian and military leadership positions, thus giving the Chancellor unprecedented control of the government. While publicly the Leadership Academy’s purpose has been to train principals to run NYC public schools, in actuality the Academy has been quietly training managers to become a sort of “shadow government”, ready to step immediately into positions heading up a number of government agencies.

Sources at the DOE have confirmed to GBN News the authenticity of these papers, and also indicated that there was some initial controversy at the DOE as to whether Leadership Academy graduates would be qualified to take over such sensitive positions as Secretary of State and Chairman of the Joint Chiefs of Staff. However, Mr. Klein insisted that if individuals with limited or no educational experience could become NYC principals with nothing but Leadership Academy training, certainly they could run government agencies since the principles of business management apply to all leadership positions.

Mr. Klein has also reportedly expanded the DOE “Truth Squad” to manage the information flow so that this secret plan will not be revealed before it can be implemented. In fact, it is surprising, given the “truth squad’s” effectiveness, that GBN News has been allowed to report the existence of this plan at all. But while GBN News will of course endeavor to continue reporting details as we learn them, readers should anticipate that our coverage of this story could be impeded by DOE operatives at any [rest of paragraph deleted by order of the DOE].

In other news, Chancellor Klein had an embarrassing moment today when he was briefly detained and questioned by school security officers during a visit to PS 445 in Brooklyn. According to sources at the school, a sixth grader had reported being accosted in the hallway by a “creepy guy who kept asking me about my test scores and then tried to take away my cell phone.” Security officers immediately pulled Mr. Klein aside and questioned him, before realizing who he was. One of the officers defended the action, saying, “How were we to know he was the Chancellor? The kid said it was a ‘creepy guy’, and we just stopped the first creepy guy we could find.”
Posted by Gary Babad at 7/13/2008 01:40:00 AM

Don't say it couldn't happen here!
Gary, you are our George Orwell.

Esp. with the entire business establishment and media behind Bloomberg -- which didn't make a peep about the Leadership Academy winning a supposedly "competitively bid" contract for $50 million -- there's no reason why not.