Amidst the NAEP findings, hypocritical Joel Klein proves he still doesn't get it 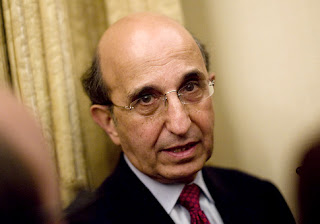 In Jennifer Medina's NY Times story --"No Gains by New York Students on U.S. Math Tests, Unlike State Scores" -- she quotes Joel Klein as saying that, as she puts it, "the city has no choice other than to use the state exam to reward and penalize schools, because it is the only test that measures all city students."

Of course he has always had another choice, and that was not to "reward or penalize schools" based on a narrow, standardized, and predictable exam in which the bar for passing is being consistently lowered year after year.
To argue otherwise is no different than a street thug who murders an old lady for her handbag and defends his actions on the grounds that there was no one else around at the time for him to rob and there were no gas stations handy. It's the same sort of false dichotomy that Klein and Bloomberg have been practicing for eight years, the type first inspired by George Bush with his infamous, "You're either with us or you're with the terrorists." We're not talking terrorists any more, but Klein's policies have been, in their own way, nearly as devastating for our schools and children as terrorism.

Ms. Medina's article goes on to quote Mr. Klein's self-defense in light of the extraordinary embarrassment of the just-released NAEP results, the ones that show the world just what the emperor's new clothes have really been all along. “I have said many, many times that we should raise the bar,” Mr. Klein said. “The state’s definition of proficiency needs to be tethered to a more demanding standard.”

In these two sentences, the chancellor of over one million children in NYC's public schools proved just how badly he doesn't get it. Let's just leave aside for the moment the fact that over the past six years, Klein and Bloomberg have positively crowed over the grade 3-8 NY state exam results, preening like peacocks over the numbers without ever suggesting in those moments that they found fault with the standards or the exams or worried that NYC schools' extraordinary results might be overstating students' real gains.
Instead, they and their crony owners of the NY Daily News and NY Post have consistently used the results in furtherance of their own political careers and/or agendas at the expense of NYC's children and their families.
What Klein's statement above shows, most significantly, is that even at the height of his regime's biggest embarrassment to date, he's not calling for a rethinking of his strategy. Instead, he's essentially asking for more of the same, and simultaneously blaming unidentifiable others for his failure! "We just need to change the tests," he's implying. "Make them more demanding."

Never mind that his policies have subverted the educational process, converting classrooms into test prep mills and teachers into Kaplan-style advisors on test-taking-strategy, demotivating students and removing exploration and creativity from the classroom, narrowing the curriculum, shoving aside other subject areas like science or social studies (and art and gym) because schools are not measured on them and principals and teachers are not incentivized with bonuses on them, and threatening principals and schools with closure if they did not "get on board" with their exam scores.
No, if only the NY State exams were made a little more difficult, then all would be well and NY students would be champions on the NAEP and truly well-versed in their understanding and use of mathematics. Yes, that's it, it must be the tests that are at fault.

Clearly, this man does not, and never will, get it. Nor will he ever admit that, just maybe, he has been wrong.

If someone wanted to devise a strategy for destroying the efficacy of America's public education system, they could not have developed anything more devious than the one Chancellor Klein has imposed on NYC schools with Michael Bloomberg's blessing and the encouragement of many others who should have known better (and probably did). --- Steve Koss

Editor's Note: the line that Joel Klein used here, as echoed by Chris Cerf, Merryl Tisch and so many others in their pack is that the state exams should be made more demanding. But not once have any of them admitted what it is obvious -- that the state tests have gotten embarassingly watered down over the last eight years; so easy that now, a student can pass them through random guessing. Why? Because to do so would essentially destroy their claim to have improved student achievement during their administration -- which even now they continue to claim, based on non-existent evidence.