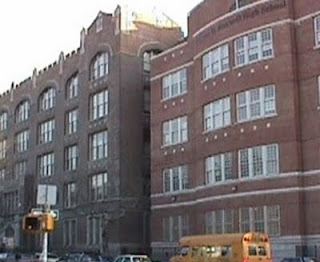 A school that has served countless students since 1951 is on the chopping block, as the mayor’s newest round of school closures descends upon New York City. William H. Maxwell V.H.S. – a career and technical school - that houses majors in medical careers, cosmetology, fashion, and graphic design - is the latest casualty.
It is a school that requires more credits from its students than the average city high school, due to the additional credit hours involved in the majors.
Although successfully overcoming the state’s SURR list status in the past – almost immediately – it was filled beyond capacity, to 2000 students – in a building that was listed to serve 900. The influx of students came from other closed schools, such as Jefferson High School, in the first round of closures that the mayor instituted. It is in this context that the school received an F rating by the mayor’s progress report in 2006. The percentage of special-ed students is currently double that of other high schools at 22%. The school also services ELL students, which comprise 5% of the enrollment.

In the following year, the staff and newly appointed principal managed to obtain a D with a rating just shy of 31 (the cutoff score to obtain a C). Small learning communities were instituted, teachers voted for advisory classes, instituted retesting, and increased tutoring hours. This year, a double digit gain was seen as the school amassed a rating of 43.2. However, the DOE increased the cut off score to 44. Therefore, it was categorized as a D school for the second year in a row. If the scale had not been abruptly changed, the school would have been just shy of getting a B on last year’s scale.

The school had been in the headlines as recently as this summer. In an article about credit recovery in the NY Times, teachers in Maxwell exposed the pressure by the mayor’s DOE to offer kids dozens of credits – seemingly for doing holiday packets of worksheets – with no certified teacher in that field present. Although recovery credits are legal according to Bloomberg’s DOE with hardly any guidelines or restrictions, teachers took exception, and many refused to go along in signing off on these packets, contending that it was the mayor’s version of social promotion and a watering down of education for political gains. In addition, many of the hard working students who attended daily, vocalized the unfairness of these credit “give-aways” to those who had not made the same effort.

The recent announcement of proposed closure by Superintendent Cumberbatch to the staff left many sitting in the auditorium confused and angry. Adding to the confusion was the fact that the DOE awarded performance bonuses to the staff for recent academic gains 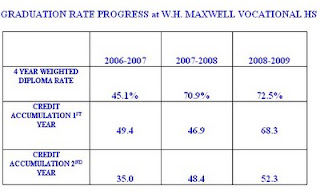 Questions were asked about the seeming randomness of the increased cut off point. Teachers angrily pointed out that the school had recent graduates enrolled in Cornell, NYU, SUNY colleges such as Binghamton and Stony Brook, and a multitude of CUNY colleges. In addition, numerous students currently work in the very fields they majored in while attending Maxwell.

Many of the teachers voiced a feeling of betrayal, after years of instituting every suggested change and initiative brought down by DOE representatives - portfolios, individual goals, diagnostic testing, differentiated learning, and a weekly array of meetings to conference on struggling students – often times ignoring the union guidelines of working through lunch periods and after school hours. This hard work produced a Proficient rating from the New York State Education Department’s quality review.

This anger has transformed into determination, as the staff, students, parents, and past graduates now mobilize to demand that the mayor lay his hands off this proud school. It’s evident that the mayor does not want this round of closures to stir up a backlash of community uproar. Several times during the announcement, the superintendent kept reminding the staff that the open forums were merely a formality that existed because of the new governance laws – that the decision is a foregone conclusion.

These warnings, however, seemed to have failed to pacify the school community. As one teacher noted, maybe it’s a relief to finally know where we stand and know who we are fighting. And even after years of stress, being on the brink of closure, the staff feels reaffirmed that the school and its successes are worth this struggle. At the public forum on Tuesday, Jan. 12th,at 6pm in Maxwell’s auditorium, the school promises to show the mayor what happens when the talents of many voices come together – to contrast the decisions of just one single man.

If you want to support this school staying open, please contact Seung Ok, teacher at Maxwell, at positivelypessimist@gmail.com

I sure will be there Mr.Ok. I also commented on the Gothamsschools website link about the schools' closing. ~~07 alumni Justina Moore

Two points...One. The DOE is very good at moving its target by raising the cutoff. It will do whatever it can to close public schools for its privatization goals and profits.

Two. Very strange that two schools, Maxwell HS and Jamaica HS, are slated for closure when they employ James Eterno, of ICE, an alternative party choice for the presidency of the UFT, and Seung Ok, respectively, two strong critics of the DOE and UFT.

Really strange...is there anything to it Daily News? New York Times? Any periodical out there that gives a hoot towards the students, parents, teachers, and all those who make up New York's working and middle class?

Is Maxwell Vocational HS now open? This article has been published seven years ago and nothing has chanced since that time:( Please let me know what has happened to the school. Thank you in advance!
Best regards,
http://customessay-s.com/essay_writer.php