From Big School to Big House 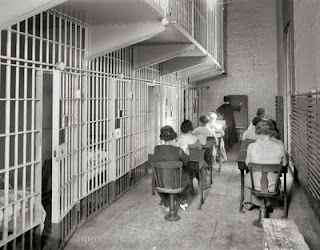 December 7, 2009 (GBN News): Mayor Michael Bloomberg today sharply rejected claims that his planned expansion of the Brooklyn House of Detention takes away money that could otherwise be used for education. In fact, the Mayor revealed a new plan through which local public school students would benefit by sharing space in the newly renovated jail facility.

In one stroke, Mr. Bloomberg appears to be trying to defuse two controversies that he has recently been embroiled in: a conflict with Comptroller William Thompson over approval of funding for the jail renovation; and the prospective closing of William H. Maxwell Vocational High School, which would leave many Brooklyn students without a local school.

The Mayor contends that his plan is a “win-win” for both the Departments of Education and Correction. “The jail gets increased capacity, the students get new space just a 10 minute bus ride from their old school,” he told reporters. “There will be great vocational opportunities on-site like license plate making. And best of all, the facility already has metal detectors to keep the students from bringing in their cell phones.”

However, Mr. Bloomberg’s plan is not without risk. If the students at the new facility fail to perform well on their standardized tests, the entire Brooklyn House of Detention could again be closed down, leaving both students and inmates out in the cold.
Posted by Gary Babad at 12/07/2009 01:11:00 PM

college singles said...
This comment has been removed by a blog administrator.
December 9, 2009 at 1:22 AM

Great post! It is very short, but I like its writing style; you're a great article author! Our custom essay writing needs people like you: responsible, highly-motivated and talented English writers!