The DOE announced yesterday that they intend to close four schools, with more such announcements expected in the near future. (The Mayor recently announced he would like to close 10% of all NYC schools over the next four years – which would mean more than 35 a year.) Yet the low performance of these schools signals the ongoing failure of the administration's educational policies.

The schools targeted for closure include William H. Maxwell CTE (Vocational) HS; a school that has been flooded with high needs student for many years. Last year Maxwell was at 94% utilization; not long ago it was the most overcrowded high school in NYC. It has target cap of 1055 – which was raised from 722 originally -- so you can see how overcrowded it really is.

An Oct. 4, 2004 Daily News article by Elizabeth Hays details the severe overcrowding at Maxwell. In the article, Ms. Hays refers to Maxwell as "Sardine High" and notes: "the former all-girls technical school in East New York is the most overcrowded high school in the city, the city Independent Budget Office said in a recent study. In the past three years, enrollment at Maxwell has skyrocketed more than 30%, from 1,341 to 1,757. And that's in a building designed for 722 students."

In many ways Maxwell is emblematic of DOE’s failures – as they have overloaded large high schools, including vocational schools, with the students that none of the small schools would accept– including many uninterested in the vocations that the school specialized in.

It always astounded me that the small schools could get away with not admitting any student who didn’t tour the school and apply, but vocational schools, which require students not only to pass Regents, but to pass exams in specific technical/vocational areas, could be sent students with no interest in those careers. The DOE says that part of their reason for closing the school is its low four-year graduation rate, but vocational schools should probably be judged on a different standard, because of all the extra courses and tests that students have to pass.

I met a teacher from Jane Addams HS in the Bronx who told me that the school was until recently the second highest performing school in that borough, after Bronx Science. Yet the new administration had wrecked his school, he said, by barring them from admissions fairs and ensuring that all the best students would enroll in the new small “New Century” high schools, funded by the Gates foundation. As a result, Addams and many other large Bronx high schools got sent all the kids that nobody else wanted.

As for Maxwell, this year the school had classes in at least twelve subjects at the contractual maximum of 34 students per class (Class sizes supposedly averaged 28.2 – though I don’t trust those numbers.) It shows how little effort the DOE has put in trying to improve these schools before closing them down.

Ironic that DOE says they are intent on trying to start new vocational schools yet if this one is closed, we will have fewer students overall in these programs than before.

Moreover, as the large schools are closed, the same sort of high needs population is sent to other large high schools nearby, overcrowding them and bringing down their performance level, like dominoes falling one by one.

See this report from Policy Studies Associates, which New Visions tried to suppress, and our analysis from November 2004, highlighting the increased pressure on the host or neighboring schools, “as a huge influx of transfers, including many "at risk" and special education students excluded from these schools, flooded other schools nearby.”

This “collateral damage” was recently conclusively shown by the recent report from the New School, “The New Marketplace: How Small-School Reforms and School Choice Have Reshaped New York City's High Schools, ” which points out:


As the city closed large troubled high schools and opened small schools in their place, thousands of students, most of whom had low levels of academic achievement were diverted to the remaining large schools in Manhattan, the Bronx and Brooklyn. Enrollment increased at three-quarters of those schools, while attendance and graduation rates declined at more than 40 percent of the remaining large schools in those three boroughs.


The DOE to this day continues to deny the damaging effects of their school closure policies, and to this day has not yet devised a process to implement it more effectively. 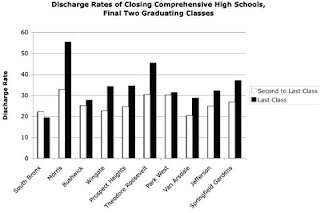 Also, as a recent report on discharges that I co-authored with Jennifer Jennings reveals, discharge rates spike when a school is closed or phased out– meaning hundreds of students are sent elsewhere or “pushed out”, to GED programs or nowhere at all; students who never have a chance to graduate with a diploma but are not counted as dropouts. Click on this chart, for more details

As to the other three schools slated for closure, they are all smaller schools, recently created under this administration.

They include the Academy of Environmental Science Secondary High School in East Harlem, with lots of classes at 30 or above. Also, Frederick Douglass Academy III in the South Bronx, with middle school classes at 33 – while the schools it was modeled after, FDA I and II, in Manhattan have significantly smaller classes.

KAPPA II middle school in East Harlem is also being closed, has had as many as five principals in five years, as well as classes at 30 students or more. I imagine they probably want the space in these three buildings to house charter schools, or perhaps even newer small schools.

The apparently poor performance of FDA III and Kappa II shows how hard it is to replicate successful schools. How many FDA’s have there been created -- eight or more? And there are nine other Kappas.

In reality, DOE is breeding new small schools each year like rabbits, with no thought of quality control, sustainability, or collateral damage on the system as a whole.

Update, 12/05: sure enough, according to the EIS (Educational impact statement), DOE wants to close the Academy of Environmental Sciences to put a new charter school in its place. Check out the public notice. Bet you that school won't have any classes at thirty or above. Comments due Jan. 25.
Posted by Leonie Haimson at 12/03/2009 02:53:00 PM

What too few recognize is that their policies are designed to disrupt the system, not improve it.

My eyes roll when someone starts "what they really should do..." because they are motivated by such animus to the very idea of a decent education for middle class and poor kids -- and hatred of our schools -- that what we should do is do our best from allowing them to do anything.

Thank you for highlighting this. Bloomberg and Klein are at war against the kids, teachers, schools, parents and entire community. The message must be repeated, it must get out.

But if your ultimate goal is to privatize/charterize the entire system, doesn't this seem like the perfect strategy to do so? Topple large schools like dominoes, make room for charters, and push the low-performing students into toppling yet more schools via overcrowding, low report card grades, etc. Eventually, those kids will have no place to go and, having discharged themselves, will not even show up in the DOE's graduation statistics. Pure genius, at least if your objectives are political and you haven't a care in the world about the young people whose lives you are ruining.

Also to brake the union by using non-unionized charter schools, ensuring higher paid seasoned teachers becoming ATRs. Next step to terminate the ATRs. If the union strikes any and all could be fired en masse.