Charter schools: the new polo ponies of the wealthy

It appears from an article in the Brooklyn Paper that the PAVE charter school board has been put on the defensive by DOE's proposal to give them a five year extension on staying at PS 15 -- and allowing them to take more space from the school each year as they expand, instead of the two year extension they originally requested.
A member of the board revealed that they have already been provided $26 million of city taxpayer funds from the NYC Department of Education for their own facility, and have raised $6.2 million more. Apparently they lack only $6 million to make this new building a reality.

Unmentioned in the article is that Spencer Robertson, the founder of PAVE, is the scion of Julian Robertson -- former hedge fund manager and according to Forbes, the #147 wealthiest person in the US, with an estimated fortune of $2.2 billion.

Julian Robertson is one of many hedge fund operators who have taken up charter schools as their new hobby, according to an article in the Style section of the NY Times. Robertson owns vineyards and golf courses in New Zealand, as well as homes in Locust Valley, the Hamptons and Sun Valley, as well in New York City.

He and other financiers are especially enthusiastic about the cause, because they their contributions are more than matched by hefty subsidies from state and city taxpayers. According to Whitney Tilson, another hedge fund operator and charter school supporter:

“It’s the most important cause in the nation, obviously, and with the state providing so much of the money, outside contributions are insanely well leveraged."

And yet Julian Robertson himself is careful not to pay NYC taxes , by making certain to spend under 183 days in the city. The state recently brought a lawsuit against Mr. Robertson senior for failure to pay taxes, but Robertson won this case, by proving that he had carefully worked out the minimum number of days he would reside in the city and having his scheduler keep records of this:

"...Mr. Robertson designated an assistant, his scheduler Julie Depperschmidt, to keep a careful count of where the Robertsons were from day to day in 2000 and to make sure they did not spend 183 days or more in New York City."
Spencer Robertson's wife Sarah is Director of Talent Recruitment at PAVE , and head of the board of Girls Prep Charter School, which has caused considerable controversy of its own by seeking to expand within a District 1 public school building. See the photo below, courtesy of the NY Times, of a recent District 1 meeting about the expansion of this school. 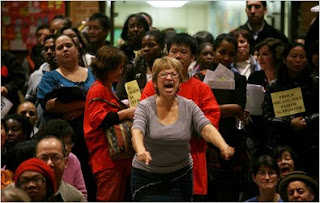 Another member of the Girls Prep board is Eric Grannis, husband of Eva Moskowitz, who makes more than $300,000 a year, operating another string of charter schools and who herself has been eager to expand her schools even further into the buildings of existing public schools in Harlem.

See this article about a "secret" meeting that took place last May, between Bloomberg, Bill Gates, Eli Broad, Julian Robertson and other members of the Billionaire Boy's club, about how to coordinate their charity "efforts".

I suppose that didn't include a measly $6 million for a building for PACE, since DOE has now given them carte blanche to keep squatting in PS 15 for at least five more years-- which presumably would also allow the school to keep collecting interest from the $26 million of taxpayer funds they already had been given for school facilities.
(I wonder what the reaction of these hedge funds operators might be if a charter school was allowed to take up space and expand within the private schools where their own children attend school. )
Finally, everyone must read this brilliant Diane Ravitch piece about how the Obama administration's "Race to the Top" program, with its emphasis on charter school expansion is antithetical to the whole concept of equal opportunity and public responsibility for education. She puts it within a historical context, as only Diane can do:

Having written the history of the New York City public schools, I was reminded of the origins of free schooling in certain northeastern cities in the early 19th Century, when wealthy men decided that it was their civic duty to help civilize the children of the poor. In their view and in their day, they were doing good deeds, but their schools were stigmatized as charity schools for children of paupers and were avoided by children of the middle class. Outside of big cities, public education emerged as a community response to a community's need to school its children, not as a charitable venture.

Today, with the proliferation of charter schools, we may be seeing a resurgence of the historic pattern as public schools are privatized and taken over by very rich men (and women) who see themselves as saviors of the children of the poor. Naturally, you find this a repellent portrait because it undermines the democratic foundations of public education. It means that our society will increasingly rely on the good will of wealthy patrons to educate children of color. It means that education is seen as a private charity rather than as a public responsibility. Let's hope that the new owners who have taken over these schools are able to sustain their interest. After all, having 500 children in your care is not the same as having a stable of polo ponies or a vineyard in Napa Valley. If the children don't produce results that make the sponsors proud, they may pick a different hobby.

Preach it sister! It is time these people and their movement is exposed for what they really are. Facts don't lie, but they do.

So they are all on their own boards ... and like the PEP committee, it is a staked group of people? Wow, what the trashy rich lords of our day and age does to the poor and how they manipulate the system in their favor. Who suffers, the public at large and in this case the poor children Red Hook and PS 15 and its staff. They are giving up their space for this? This is an outrage! And see how the elected officials protect the citizens against this...they sit back and do nothing! So much for the people who represent Red Hook, Sara Gonzalez the Brooklyn Borough President Marty Markowitz, they should be ashamed of themselves for doing nothing for the people of Red Hook and PS 15.

PS 241, also known as the Family Academy is a public school that had many private and wealthy donors giving to our school for years. These private donors would walk up and down the school's hallways to look at how their money was benefiting the black children of Harlem. The school had millions. A private group, started by the principal, would fund raise for the school. They were called the Friends of the Family Academy. The money paid for many additional staff like social workers, club activities, an extra hour of instruction and a summer program. It was great until these fickle donors decided they would rather give to 911 charities. When the money began to dry up, the services began to go away. When Klein mandated a uniform curriculum, the Friends of the Family Academy decided that they no longer wanted to be our school's friend. They left, took all of their money with them and then changed their name so they could sell curriculum to charter schools, which, I believe they are still doing today. The DoE then attempted to close the Family Academy last year. PS 241 is a perfect example of how overprivledged, educationally ignorant charity is no way to fund a school system. They will eventually put down their school toys for another, newer and more exciting toy that catches their interest. Entire communitys will be forgotten like PS 241. I still seethe with anger when I think of how the children from the 241 community were dropped like yesterdays newspaper.