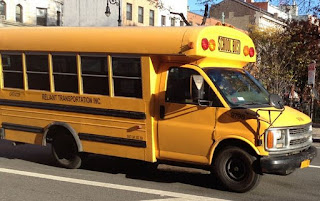 The DOE unilaterally eliminated middle-school busing from many areas of Queens and Staten Island that have no public transportation, and this may have contributed to the death of at least one public school student.  Along with some news clips, the data on how few safety variances the DOE has granted in authorizing busing in hazardous areas is here, FOILed by Michael Reilly of CEC 31.  What's somewhat shocking is how DOE has approved more safety variances authorizing busing for a greater proportion of private school students than public school students.


Here is the resolution introduced by Dmytro Fedkowskyj, Queens representative to the Panel for Educational Policy, asking to create advisory committee of stakeholders to oversee the process of granting busing variances, which was tabled  rejected  by the mayoral majority of appointees on the PEP at the last meeting.  Correction from Dmytro: the resolution was "tabled it until the next PEP meeting based on the conversation that PEP members had when it was introduced for business. It will be back on the agenda next month if we can't come to an agreement. I am hopeful that DOE will take action before the next meeting."

Panel Recommendation to the Chancellor that the Department of Education Create the “Safety Hazard Advisory Review Program (S.H.A.R.P.) for Office of Pupil Transportation Hazard Variance Applications – Dated January 18, 2012
Whereas, a joint NYC independent Budget Office and NYC Board of Education report stated “The proportion of general education pupils in public and private schools who currently ride yellow buses varies considerably  across boroughs”; and
Whereas, the Department of Education (DOE) eliminated certain school bus variances in September 2010 which disproportionately affected students in specific areas within the New York City, particularly in Queens and Staten Island; and
Whereas, the DOE Office of Pupil Transportation (OPT) stated at that time that individual variance applications would be reviewed and granted where appropriate; and
Whereas, according to DOE hazard variance application and approval data covering the period from January 2010 through September 2011, 1,130 applications were submitted (881 by public schools and 249 by private schools) but only 177 were approved citywide (108 or 12% for public schools and 69 or 28% for private schools) ; and
Whereas, 1,028 of the variance applications submitted during this time period (468 or 42% from schools in Queens) and (560 or 50% from schools in Staten Island) – the two boroughs acknowledged to have the greatest need for yellow bus service in the IBO/BoE report; and
Whereas, Queens submitted 468 applications with only 42 approved (18 or 5% for public schools and 24 or 34% for private schools) while Staten Island submitted 560 hazard variance applications and only 123 were approved (82 or 20% for public schools and 41 or 27% for private schools);
Therefore be it RESOLVED, that the Panel for Educational Policy, within its power under State Education law, recommends that the Chancellor authorize the DOE’s Office of Pupil Transportation to implement the following Safety Hazard Advisory Review Program (S.H.A.R.P.) to establish a standard operating procedure for reviewing hazard variance applications, while providing transparency to the variance process:
• Establish school district advisory committees by May 2012, based on a Community Education Council written request whose primary function will be to establish clear and concise criteria for granting hazard variances.
• The criteria for granting hazard variance could be modeled after a NYS Education Law 3635 (b) which establishes Child Safety Zones
o A list comprised of identifiable road hazards would be established
o Each road hazard will be assigned a point value
o Lack of adequate public transportation will also be allotted points
o In order to grant a pupil transportation hazard variance, a clearly defined total score must be achieved
o Each grade level will require a specific number of points to meet the eligibility requirements for a hazard variance.
• Each school district wanting to create S.H.A.R.P. committees would be comprised of nine (9) representatives; (3) Community Education Council members, (1) DISTRICT Community Superintendent, (3) DOE representatives from the Office of Pupil Transportation, (1) DOE Office of Parent and Community Engagement and (1) respective Borough President designee.
• Each S.H.A.R.P. committee will collectively analyze the conditions and grant hazard variances by majority consensus.
• Each S.H.A.R.P. committee will meet twice yearly. (September and February). DOE, OPT and individual schools will advertise the hazard variance application process in June of the preceding school year.

This all has to do with money. My eight year old was denied transportation this school year due to being in 3rd grade. Files a variance and was denied due to age and distance. There is a Expressway where we have to walk. Very dangerous for anyone to walk, not just children. The DOE/OPT and NYS dont think so.There is something really wrong!