24 new charter schools looking for space. Watch out -- your school could be next! 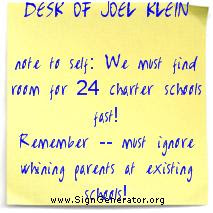 Someone is creating space for new schools in NYC – unfortunately it’s not the DOE. See below article from NY Observer, about a private school company snapping up lots of real estate in a down market.

Meanwhile, our public schools are increasingly overcrowded, with class sizes increasing in nearly all grades, and likely to become more so next year – with little or no plans to relieve this ongoing crisis. Actually, because of DOE policies, it’s likely to get much worse.

According to Inside Schools, while 24 new charter schools are expected to open in fall 2009, only a handful have an announced location so far – and most of the rest are likely to be crammed down the throat of some unsuspecting existing public school.

Charter schools are approved one year prior to their opening in September, but the Department of Education doesn't determine whether DOE space is available until January, said Mike Duffy, executive director of the city's charter school office. Although charter schools can choose to obtain private space and determine their location sooner, most decide not to for financial reasons.

Though it is difficult to do an exact comparison because of DOE’s lack of financial transparency, these hidden (and voluntary) subsidies mean that in the end, appears to be sending a greater per student amount of taxpayer funds to charter schools than to most of our regular public schools. This may partly explain how charter-operator Eva Moskowitz was able to afford to pay herself a hefty $371,000 salary in 2006-7, as well as continue to expand her aggressive PR, fundraising and recruitment operations. Not to mention the sixteen openings for administrators currently posted on her school’s website.

Watch out for DOE announcing the closing of more and more neighborhood elementary schools in the near future, not because they are failing, but simply because our educrats are intent on finding good real estate for all the new charter schools they want to house – at the expense of our existing schools.

Check out the recent NPR story about the separate but unequal system that NOLA’s public school system has become with the growth of charter schools – with the regular public schools receiving worse facilities while saddled with a far larger proportion of the kids that nobody wants. Is this the future we face here in NYC?