Assembly hearings in the Bronx: the Parent Commission makes their debut 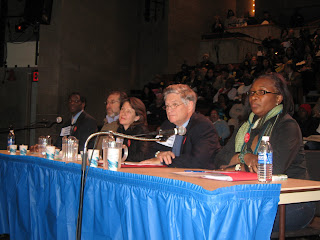 There were hundreds of parents, advocates and union members filling the seats at the Assembly hearings on governance at on Friday. The morning started off with a bang with testimony from a panel of Parent Commission members, putting forward their proposals on how the current governance system should be reformed.

The theme of the Parent Commission’s recommendations is the need for a real partnership and collaboration with parents rather than Mayoral dictatorship. We are proposing that the Chancellor and his policies be subject to both state and city law – and that there needs to be a truly independent and responsive Board of Education to provide necessary checks and balances. The Board should consist of 15 members, including six parent representatives, elected directly by Community Education Council members – who themselves will be elected directly by parents in each district. The Mayor will have three appointees, the City Council and the Public Advocate each one, and together the Board will appoint four more members to build up their expertise in specific policy areas, like the needs of ELL and/or high school students. It is our hope that the process of coming together to appoint more members will act as a consensus building exercise.

The Parent Commission also recommends the formation of an Independent Accountability Office, a truly independent Inspector General, answerable to the public, and an Ombudsperson, to respond to and resolve parental complaints. We have also put forward reforms on restoring the role of school districts, strengthening parent input, improving special education, and forming a commission to create a Constitution for the NYC school system. Check our position paper here; the full report will be out next week.

Following the Parent Commission panel, the DOE testified, with Maria Santos the head of Office of English Language Learners leading off. Despite the fact that Assembly member Carmen Arroyo accused of being a liar, I thought ’ testimony was among the most honest of any from the DOE in years. admitted that the achievement levels of middle school ELL students has been stagnant, and that graduation rates among this population has been flat. She did not try to spin the data, and twice said smaller classes would be necessary to improve results for this high needs population. (Indeed, the much-praised NYC International High schools for ELLs offer classes much smaller than the city average.)

Santos’ frank testimony was quite a contrast to the arguments of her fellow panelist in the Bronx, Chris Cerf, Deputy Chancellor, who consistently downgraded the importance of class size, criticized class size reduction as too expensive, (citing an hugely inflated estimate of $800 M for a 10% reduction) and said that this reform was not a top priority for the DOE -- despite the state law that mandates a move towards smaller classes in NYC.

Assemblymember Aurelia Greene of the Bronx and Education Chair Cathy Nolan were both very piercing in their questioning of Cerf, and asked him repeatedly 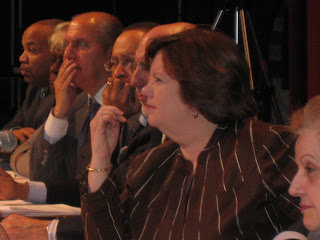 why the DOE had failed to reduce class size, and indeed why class sizes had increased this year. Nolan asked him whether he thought the program was voluntary. He admitted it was not, but did not explain if DOE intended to improve their compliance in the future.

Other highlights included the questioning of Cerf and Deputy Mayor Walcott by AM Daniel O’Donnell of Cerf about their policy of replacing the neighborhood zoned schools with charter schools. He honed in on PS 241 – a school in his district, with 45% special education and ELL students, that DOE intends to replace with a branch of , a chain of charter schools which as of this year according to state data had only two ELL students.

Cerf claimed that charter schools have high proportions of Hispanic students, and that DOE didn’t care about what kind of school was offered, as long as it has results. Later Luis Reyes offered testimony that while the NYC public schools have 14% ELL students, charter schools enroll only 4% ELLs, according to data provided him the City Comptroller. (Not surprisingly, the DOE does not make this information available to the public.)

Both AM Mark Weprin and AM Ruben Diaz Jr. were critical about the amount of testing and test prep in our public schools. AM Michael Benjamin asked about the decline of minority students at Bronx Science, his alma mater, and the other specialized high schools. What was interesting is that among the ten or more Assembly members who spoke, there did not appear to be a single one who supported the administration’s policies or Mayoral control in its current form unchanged. Where the Mayor will obtain backing for his continued chokehold on our schools is unclear – but perhaps he is relying on a backdoor deal.

There are accounts of the hearings in the NY Times blog; Gotham Schools, and WNYC radio. On each you can leave comments.
Posted by Leonie Haimson at 3/15/2009 05:41:00 PM